Since my previous post on Praying Mantises in the park (“Praying and Preying,” September 4, 2018), I have found several more mantises and have watched them in different activities. I have seen a pair mating and two different females laying eggs. Their egg laying is fascinating.

Praying Mantis females produce both the eggs and the egg case. The case, called ootheca, looks a little like styrofoam. It is securely attached to plant stems and is about an inch long. The female fills the case with, perhaps, 100 to 200 eggs. In both egg layings I observed, the female had assumed a head-down position and the case was attached to the plant about four feet from the ground. 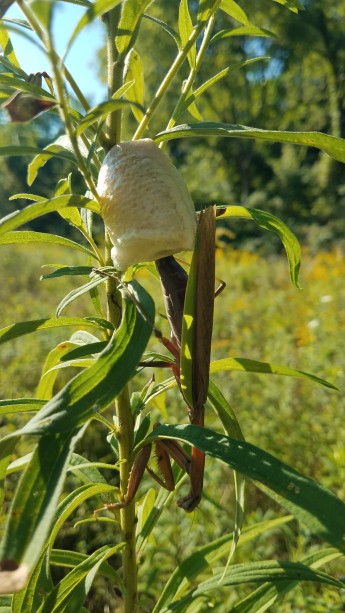 When finished, she leaves the case in place, where, if all goes well, the eggs will survive the winter and the young will emerge in the warmth of spring. It will be more than 6 months before these young emerge. When they do, they will look like tiny versions of the adult. And they will have the same indiscriminate carnivorous habits – their first meal may be a sibling.

In the next picture, the female is just pulling away from the case, egg laying complete.

The ootheca hardens and turns a little darker shade. The next picture was taken 4 days after egg laying.

Laying the eggs is lengthy process, which is not surprising when we realize that not only does the case have to be made for housing the eggs, but each egg is placed in a different chamber in the ootheca.

A few days after the observed egg laying, I spotted a third Praying Mantis egg case on a shrub. I do not know how old this one is, so do not know if the eggs had hatched, but the case had been broken into, perhaps by a bird.

Since it was no longer functioning as a protective environment for eggs, I cut the ootheca open to get a better sense of its structure. Though the details are hard to see in this picture, it might provide some sense of the way the case is structured.

Praying Mantis egg laying is not a simple process of laying eggs on a plant. As I observe what happens to the egg cases over the next months, I will likely learn more about the life cycle.

As I noted in my first post last December (“A Sense of Wonder”), Eliza Howell Park “provides an excellent opportunity for me to experience the natural world in its wonder and excitement and beauty, right in the heart of a major urban area. I continue to be excited by what nature presents in season after season.”

Recently, the Praying Mantis has been the latest “critter” to contribute to my sense of wonder and excitement.