I have associated goldenrods with September for some 70 years, ever since I was in the early grades of elementary school and back-to-school days included a yellow-papered “Goldenrod Writing Tablet.”

Now, I enjoy many September hours in the midst of the different goldenrod species in Eliza Howell Park, watching the “critters” they attract. 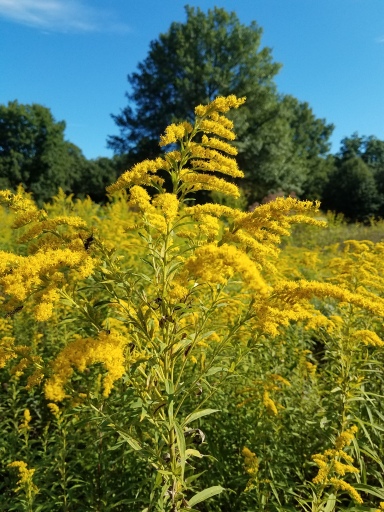 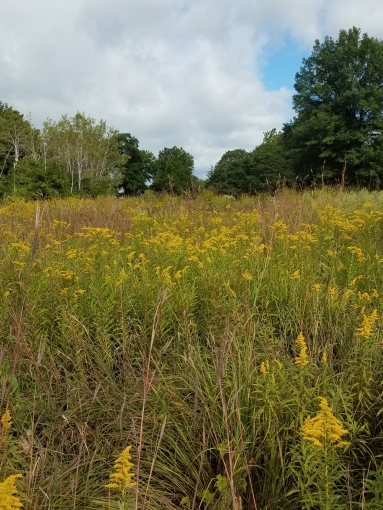 Many of the Eliza Howell summer wildflowers are nearing the end of their blooming season, but the insects appear to find goldenrod nectar plentiful and satisfactory.

Some of those attracted are large and iridescent. Here are two views of the same individual (Great Black Wasp, I think).

Some are black and white (Bald-faced Hornet and Black and White Wasp).

The Locust Borer Beetle is one that I do not remember from previous years. It is possible that I missed it or have forgotten, but I wonder if it is now becoming more common in EHP.

Two that I do remember – and did an entry on last year – are the Goldenrod Soldier Beetle and the Ailanthus Webworm Moth, a moth that does not lead one to think immediately of “moth” when first seen.

Sometimes the flowers get crowded, but most insects seem to be willing to share. 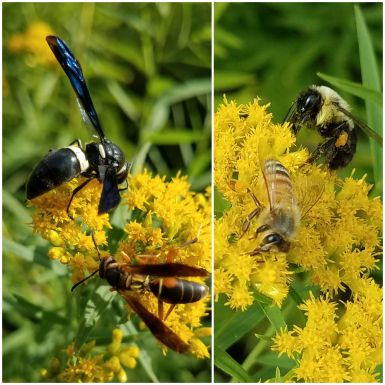 It is not just insects that are attracted.

Sometimes there is a mammal (not pictured) wandering among the goldenrods, carrying a little camera.

Snails (Brown-lipped or Banded snails) prefer the stems to the flowers.

Goldenrods were for years inaccurately thought to be a major contributor to “hay fever” symptoms. There is no reason to avoid and many reasons to enjoy a large path of goldenrods, definitely one of the highlights of September.

In addition to others not mentioned, the wasps and beetles and bees and moths and snails and I are grateful for their presence.

One of the highlights of a walk among the flowers in Eliza Howell Park these summer days (like the public nature walk scheduled for August 25 at 11:00 a.m.) is the presence of insects, often seen flying around the plants and, at times, sipping nectar from the flowers.

Some are butterflies, but many of the insects attracted to the wildflowers are bees and wasps. These are similar enough that they can easily be confused. There are, however, important behavioral differences.

Perhaps most important, bees eat pollen and wasps eat other insects. Both visit flowers to drink nectar. Bees collect pollen for their young; wasps take insects to their young. These behavioral differences relate to some differences in appearance.

Bees are usually furry or hairy (pollen sticks to hair and that aids in collecting) and thick-bodied. They have stout legs. Wasps, on the other hand, tend to be hairless, thin-bodied (the thin waist can often be noted clearly), with longer and thinner legs. 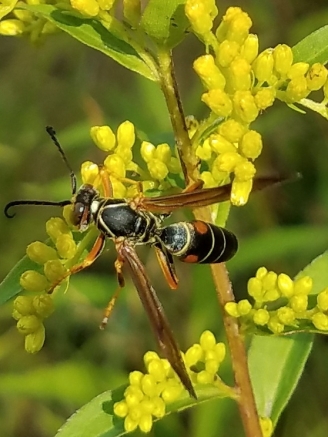 Up-close pictures, like this one of a bee in a Chicory flower, can often reveal how much a bee gets covered with pollen. 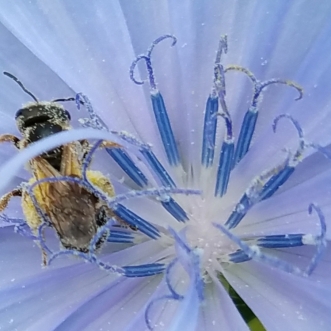 The “bees” that come uninvited to picnics in late summer are usually Yellow Jackets, a type of wasp, not a bee. It is also the wasp Yellow Jacket that builds nests in the ground, sometimes near human homes. The Bald-faced Hornets that build the nests in trees are also wasps, not bees. (See my December 19, 2017, post for more on these nests in the park.)

The next picture is of a bee (note the hairy body and short legs), while the one after that is of a wasp (lack of hair and longer legs). 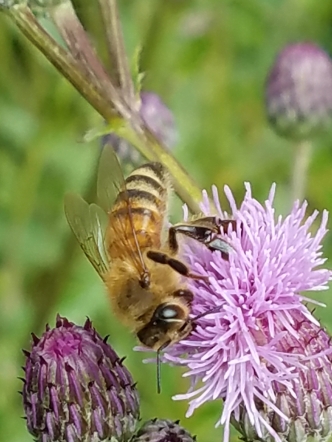 Since there are in North America literally thousands of different species of bees (including dozens of different Bumblebee species) and thousands of different species of wasps, I do not normally attempt to identify the particular species that I see. I do find it helpful, though, to be able to recognize something as a bee or as a wasp. This is a first step in understanding its behavior and its role in the bigger picture of the natural processes occurring in the park.

Note: All of the pictures are from Eliza Howell Park

The next Eliza Howell nature walk will feature goldenrods and the insects they attract. It will also provide an opportunity to observe other aspects of late summer nature in the park.

Anyone interested is welcome to join us in Eliza Howell Park for a guided walk among the flowers, especially the goldenrods, on Saturday, August  25, at 11:00 a.m. We will meet about halfway around the road loop from the Fenkell entrance. Clothing suitable for walking among tall plants is recommended. Stay as long or as briefly as desired. There will likely be a number of photo opportunities.

Over the years, goldenrod has sometimes been mistakenly identified as the source of pollen that causes hay fever symptoms. The real culprit, however, is ragweed. Goldenrod beauty can be enjoyed up-close without breathing any pollen.

These pictures were all taken in the second half of August, 2017.

“Perhaps it is due to the fact that goldenrods peak when many insects are mature, or that the plants grow in clusters and groups, that they are the hub of insect activity. The plants literally buzz with bustling insects from dawn to dusk.” (Larry Weber, In a Patch of Goldenrods, 2016.)

Below are two examples of the insects seen among the Eliza Howell goldenrods in August 2017.

Many pollinating insects, like wasps and bees, have the capacity to sting. As a result, some of us are understandably reluctant to walk too closely among the flowers that attract them. Some of us have had the experience of many times approaching closely to insects while they nectar on flowers, without ever having been stung, and have no hesitation getting close. Either approach is respected.

Among the other late summer developments that there will be an opportunity to observe on August 25 is the maturing Porcelain-berry. 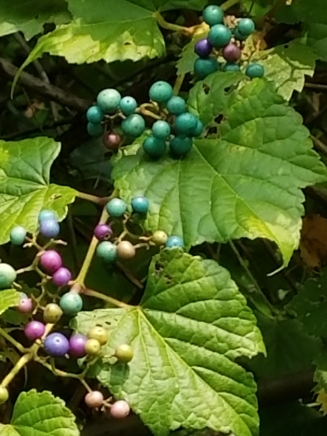 The turnout and enthusiasm at the July 14 nature walk led to the decision to have this second summer one on August 25. Feel free to spread the word.

Most visitors to Eliza Howell Park never see them, but there are many hundreds of Bald-faced Hornets here every summer. They are a native North American social wasp, not a true hornet, and build new nests each year. They are insect eaters much more than nectar collectors, so are not found on flowers as much as bees.

They do visit flowers more late in the season, however, and that provides the best opportunity to see what they really look like. The white on the face accounts for the “bald-faced” name (they are also sometimes called “White-faced Hornets”).

Bald-faced Hornets are best known by the nests they make, usually placed in tree branches and hidden in the leaves. In the last couple of years, I have kept a record of each nest that I have observed in the park. I don’t finish my count until sometime in December, when they are more visible with the leaves gone. Since paying closer attention, I have seen at least 10 nests annually – and have no doubt missed a number.

The nests are gray and sort of football-shaped, though more the size of a basketball, typically located high in a deciduous tree.

Fortunately, most years I find at least one that is low enough to be observed more carefully. 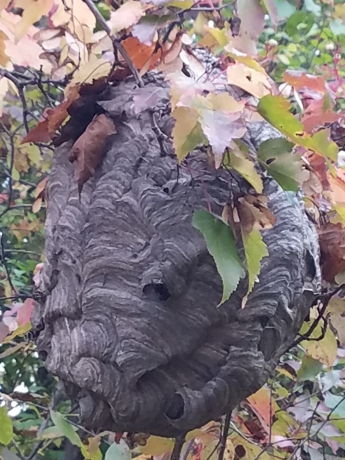 When these low nests are pointed out during nature walks before frost brings an end to hornet season, participants are often reluctant to approach too closely. It is a reasonable reluctance, since the greatest risk of being stung is from hornets protecting their colony. But it is not a big risk if one remains a few feet away.

The nests are made of paper-like material, wood fibers that have been mixed with saliva. The opening for going and coming is at/near the bottom of the nest. 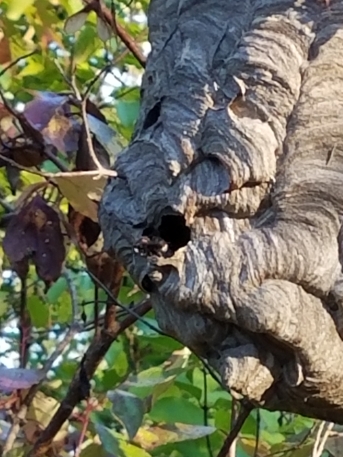 Each colony is reported to have, at maturity, 100-400 individuals, made up of infertile female workers, reproductive females, and male drones. And, of course, a queen. Queens are the only Bald-faced Hornets that survive the winter, wintering in a sheltered place in trees or the ground. In the spring each queen that has survived begins to build a nest. She makes a few brood cells, deposits eggs in them, and feeds the larvae. The first brood then takes over nest building, food collection, and feeding.

When the nests are broken open after the hornets are gone, one can see the layers of cells that look like honeybee combs. There are tiers of combs within the thicker outer shell.

It is likely that more queens survive the winter in mild-weather years. This might account for the large number of nests I noted these last two years, following two mild winters. Or I may just be getting a little better about spotting the nests. It will be interesting to see what the findings are next year if this winter is a hard one.