Wild black raspberries grow well in Eliza Howell Park, but I confess that I am a little reluctant to broadcast the best locations for finding these plants. There is self-interest at work, of course; I am hoping to have continued access to the berries myself.

Black raspberries are sometimes called black caps and are very different in taste from blackberries, which also grow in Eliza Howell (and ripen a little later in the summer).

In the winter, the Eliza Howell raspberries that I pick look like this. 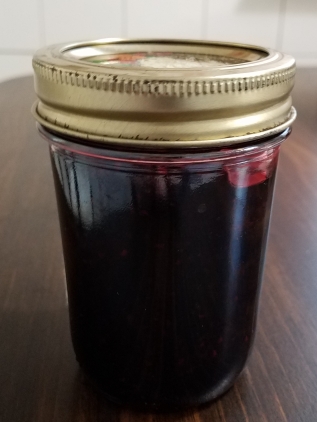 Each year I pick quarts of these luscious berries for eating fresh and, thanks to Margaret, for having jam for the entire year. Every time I eat a peanut butter and jam lunch, I am experiencing another reward of getting to know Eliza Howell Park well.

Raspberries are found in different locations in the park and getting a handful while on a walk near the beginning of July is not difficult for those who keep their eyes open and are willing to depart a little from the beaten path.

Getting lots of handfuls takes knowledge of where the berries are concentrated and takes, as well, a willingness to accept the reality that wholesale picking usually involves getting personal with thorns and mosquitoes. (While it is true that I am protecting my self-interest, the mosquitoes and thorns are very real, especially the mosquitoes.)

There have been 5 or 6 major concentrations of raspberry canes (bushes) that I have harvested over the years, but old hotspots die back and I have been able to find new spots from time to time. In June I start checking the most productive sites from the previous year, but almost always find that the berries are no longer common in the some of these locations. And then I might stumble on new finds.

The berries grow in clusters on arching thorny canes and, after white blossoms in the spring, the green berries become noticeable in early June.

Sometimes, but not frequently, it happens that large cluster of berries is ripe to pick at one time. That means fun! 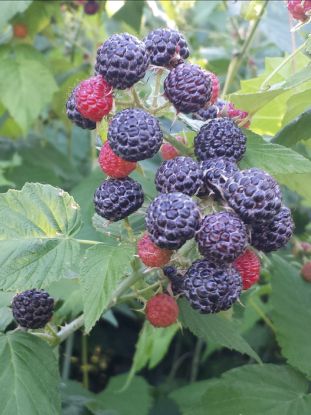 The raspberries grow in different environments, both in edges near open areas and deeper in some wooded locations. The berries in sunnier spots usually ripen earlier than those in the shade, which extends the total picking time to about three weeks, beginning in very late June (depending upon the weather up to that point in time, of course).

Now, I need to wrestle with the question of what to do if/when asked what the best locations are to pick these berries in Eliza Howell Park. Maybe I can describe how I cover myself in the heat of summer to protect from the mosquitoes and thorns. Or maybe I can explain how long it takes to pick enough for pie or jam. Or maybe I can point out exactly where to find the best berries???