With so much happening in the first half of May in Eliza Howell Park – early wild flowers blooming, migrating birds passing through, breeding birds arriving, toad tadpoles developing – I can forget then to mention that this is usually the best time to find dryad’s saddle. So let me give it its due attention in winter.

Dryad’s saddle is one of several kinds of bracket or shelf fungi found in the park. Bracket fungi are woody, shelf-life mushrooms that grow on the trunks of trees or on logs. This particular shelf fungus often has the shape that accounts for the “saddle” part of its name.

A comment on mushroom identification: My identification of this fungus as “dryad’s saddle” is based on appearance, location, and time of year; it is not based on close examination by an expert or a professional. I strongly recommend that someone interested in collecting it for eating not rely upon pictures alone (mine or someone else’s) for identification, keeping in mind the strong toxicity of some bracket fungi.

Dryad’s saddle grows on dead trees, stumps, and logs and is also found in the wounds of living trees. When on tree trunks, the shelves are usually quite low. 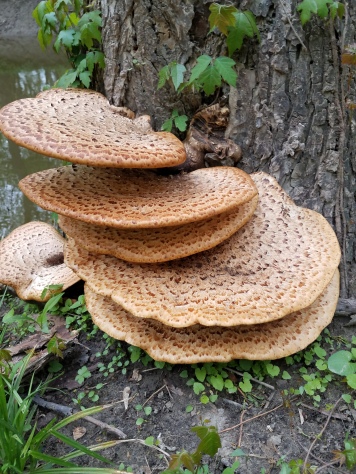 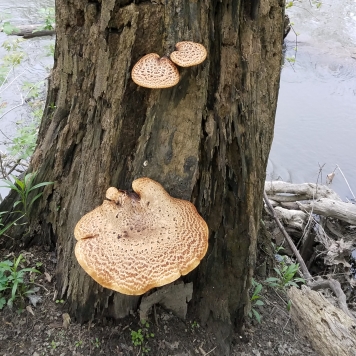 A “dryad” is a tree nymph or tree spirit in Greek mythology. Presumably, a dryad is of a size to fit on this mushroom.

The caps can be from about 3 inches to more than 12 inches wide. I placed a pen on a larger one to provide an indication of the size.

They seem to appear suddenly; I am surprised by seeing them along a walking route that I took only two days before without noting anything. There may sometimes be a single saddle, but more often a small cluster.

Dryad’s saddle functions as a decomposer, an agent of wood decay in dead and injured hardwood trees.

May is the month when many mushroom enthusiasts head to the woods in search of morels and I sometimes get asked if there are morels in Eliza Howell. I have not seen any morels (yet), but dryad’s saddle is, in my mind, a good alternative May find. (All the pictures here were taken in May.)

I will report when/if I see the tree nymphs!

As I was walking in Eliza Howell Park the other day, I met one of the regular park walkers. He greeted me – “What are you watching today?” – and I gave a one- word response – “Mushrooms.” He laughed and we continued on our separate routes.

As I reflected later on that day’s walk, I thought that a more complete answer would have been that I was “checking fallen logs to see some of the mushrooms involved in the decomposition of wood, the first stage in the recycling of the nutrients.” But that is not exactly a casual response to a greeting.

In an earlier post (October 4, 2018), I noted some of the ground mushrooms that grow in Eliza Howell Park. This essay is about some of the wood mushrooms. While wood-growing mushrooms are sometimes called fungi, any fleshy fungus can be called a mushroom, as I do here.

In the first couple years after trees/limbs fall, while the logs still have bark, the mushrooms appear, often in large numbers.

Sometimes the rows of mushrooms remind me of rows of garden flowers or vegetables. One fallen tree, 70 feet long, was covered.

These mushrooms are agents of decay, contributing to the process of breaking down the wood. This decay is needed to get the nutrients that the trees used back into the ground for other plants to use.

I am more an admirer of nature than someone who focuses on how things work. I want to know what is going on, but even more I am simply fascinated by what I see. These log gardens have some interesting “flowers.”

To me they are lovely decomposers.

Most live in groups, but some are singletons.

Three years ago, a large white oak tree at the edge of the woods split in two, right down the trunk. The standing half has continued to thrive, this year again producing many large acorns.

The fallen limbs have now been colonized by mushrooms.

Half of the tree lives on. Half is in the process of being recycled, aided by the lovely decomposers. Both are good fates.

With most of my attention on birds, wildflowers, butterflies and other insects, I did not always look carefully at mushrooms during my walks in Eliza Howell Park. This has changed. I now stop for mushrooms, especially in September and October when they are most abundant, both in numbers and in variety.

Mushrooms, in different shapes and sizes and colors, can be found pushing up from the ground in almost any section of the park, often but not always near trees. Some have the familiar umbrella shape. 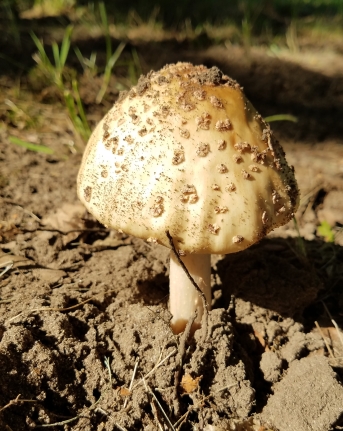 The majority are white. This collage of white mushrooms includes examples that do not have the stereotypical umbrella shape.

A mushroom is a fungus (but not all fungi are mushrooms); fungus is its own kingdom in the classification system, separate from plants. The part that rises from the ground is the fruiting body, only a small part of the much larger organism that lives underground.

I sometimes think of mushrooms as non-plant flowers, especially the colorful ones. 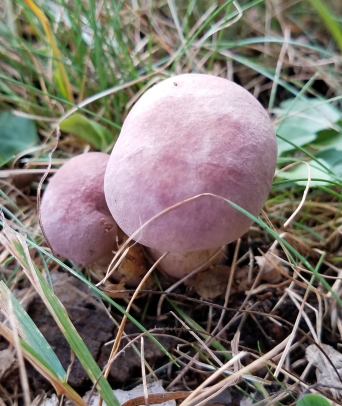 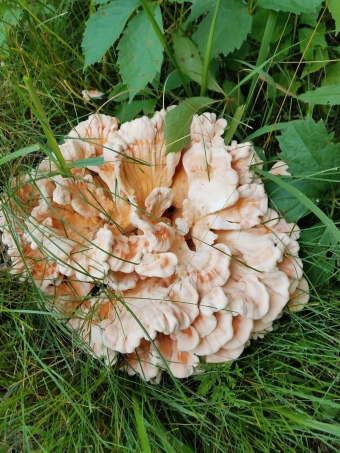 Mushrooms have long been hunted as food and some varieties are cultivated. Selecting naturally growing mushrooms for dinner can be risky if one does not know them extremely well; some poisonous ones look very similar to edible ones.

When I stop and look, my interest is observation, not eating. I have to admit, however, that this one, about 6 inches across, reminds me of a loaf of bread! 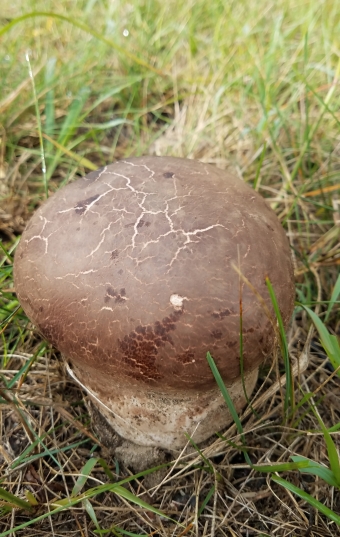 Most mushrooms are soft and short-lived. They are the reproductive stage of the organism; they sprout, open up, and drop their spores.

Many mushrooms have gills from which the thousands of spores (reproductive cells) drop and disperse. Picking or cutting a mushroom (which does not harm the larger organism) provides an opportunity to take a look at the gills on the underside of the cap. 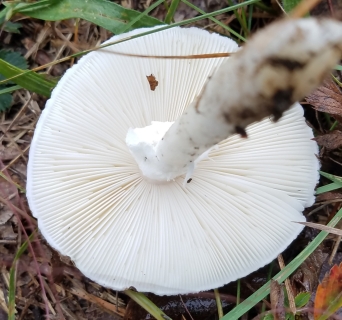 Some mushrooms grow from the soil and some grow from (often decaying) wood. Those shown above are ground mushrooms. Just as fascinating are the wood mushrooms, including bracket or shelf fungus.

A look at varieties of bracket fungi in Eliza Howell is a project for another time. It was difficult enough to select/limit the pictures of the ground mushrooms here. There is a whole world of mushrooms out there!