A neotropical migratory bird is a bird that breeds in Canada and/or the U.S. and spends (our) winter in Mexico, Central America, South America, or the Caribbean. Many such species arrive in and/or pass through SE Michigan in May.

Over 2 dozen different species of warblers alone arrive at this time of the year and many, many bird watchers head for migrating warbling hotspots like Magee Marsh in Ohio, Point Pelee in Ontario, and Tawas Point in Michigan.

Warbler chasers come to these hotspots from all over, in big numbers, and with big cameras. These tiny birds (about the size of chickadees) are one of the key reasons that bird tourism is a big business in some locations.

Warblers also pass through Eliza Howell Park, though in smaller numbers. Here are some of the migrating warblers that I tend to see every May in the park. Each picture is of a male in breeding season plumage.

The following photos were all taken by Margaret Weber. My thanks for the permission to use and my appreciation of the quality of the shots.

Blackburnians pass through here on their way to their breeding grounds from mid-Michigan through much of Canada.

This is one of the few warblers that forages for insects along the branches of trees rather than in the leaves.

Chestnut-sided Warblers glean insects from the bottom of leaves. Their breeding area includes much of Michigan. 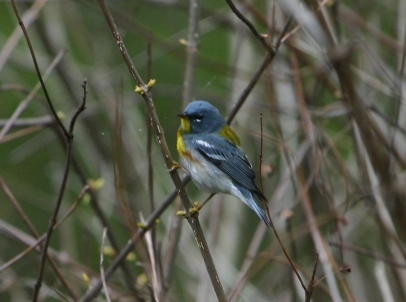 In breeding season, this forest bird is usually high in the canopy. In migration, however, it is often low enough for good looks.

The Nashville Warbler is misnamed. It migrates through Tennessee, but neither summers nor winters there. It breeds in northern Michigan and Canada, nesting on the ground.

The Magnolia Warbler was given its name 200 years ago by an ornithologist who found it in a magnolia tree in Mississippi (in migration). It breeds in the northern forest, far from any magnolias.

American redstarts breed in much of the eastern United States, favoring woodlands with abundant shrubs. I have not yet observed them in breeding season in Eliza Howell Park, but it would not surprise me if I do some year.

There is not much that can compare with the excitement of seeking and finding these beautiful birds as they near the end of their long migration northward. During their May migration through this part of the country, approximately May 5 to May 20, I spend some time with the crowds at the famous hotspots.

That is exciting, but it is even more satisfying for me to see these warblers right here in this Detroit park. I hope to introduce others to the experience.

Over the years, I have seen 145 different species of birds in Eliza Howell Park.

Both numbers are important. The total number of birds recorded is an important indication of the diversity of birds that visit the park. The monthly number is important for human visitors interested in observing birds at a particular time of the year.

The birds of Eliza Howell can be placed in the following categories:

(1) All seasons (or year-round residents). These species can be found in the park all seasons of the year (though not usually in the same numbers at all times). They do not migrate north-south or, if they do migrate, Eliza Howell is within both their summer and their winter range.

An example of an all-seasons EH bird is the Red-tailed Hawk. 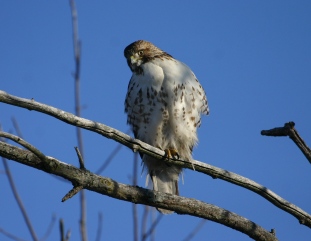 (2) Summer only. These species can usually be found in the park in the breeding season and are typically seen between spring and fall. They are birds that migrate south for the winter, but their summer range includes Eliza Howell.

Approximately 33% of total species are summer only.

The Rose-breasted Grosbeak is one such species.

(3) Migrants. These are the migrating species that breed further north and winter further south. They are in this area only as they pass through and can normally be found in a short timeframe – a couple weeks to a month or so. The peak spring migration through Detroit occurs in May and the peak fall migration month is in September. Some species pass through in April and October.

Approximately 41% of the total species are migrants.

The Magnolia Warbler is one of many migrating warblers that stop briefly in Eliza Howell each year.

(4) Winter visitors. These few species spend the breeding season further north and migrate south for the winter. The “south” for these species includes the Detroit area. They arrive in fall and leave in spring.

Approximately 5% of the bird species are winter visitors.

The American Tress Sparrow is one of the 5%.

Group 3 is the only one referred to a “migrants” above, but species in groups 2 and 4 also migrate twice annually; however, they stay much longer. While the migrants that pass through in the spring and fall are the most numerous, they can easily be missed because they are in the area only for a short rest and refueling stop.

The most species are usually seen in September and May because all-seasons birds, most summer residents, and many migrants can be found in these months.

Based on experience, I have a very good idea what birds to expect each time I visit Eliza Howell. But nature is always somewhat unpredictable, so I also expect the unexpected. END_OF_DOCUMENT_TOKEN_TO_BE_REPLACED