In Edward Lear’s famous poem, “The Owl and the Pussy-cat went to sea.” “The Beetle and the Moth came to Eliza Howell Park” may not be a great opening line of a poem, but the beetle and the moth have in fact come – in large numbers – this August.

The beetle is the Goldenrod Soldier Beetle and the moth is the Ailanthus Webworm Moth. Though I am without records from previous years to compare, it does definitely seem that they are both much more common this year.

Note: These are two just of the “critters” likely to be found among the goldenrods on the public nature walk in EHP on Saturday, August 25, starting at 11:00 a.m.

Soldier beetles resemble fireflies or lightning bugs. They are called “soldier beetles,” reportedly, because they reminded someone of a military uniform (especially, a red species suggested the British “redcoat”). They are also called “leatherwings.” The Goldenrod Soldier Beetle, named for its close association with goldenrods, is also called “Pennsylvania Leatherwing.”

These beetles are often found on flowers (here on Wild Bergamot), where they feed on pollen and nectar. They also sometimes eat small insects, such as aphids, eggs, and caterpillars.

Recently, I looked over a patch of some 12 to 15 blooming goldenrods and spotted at least 20 of the beetles. Goldenrods, at this time of the year, also serve as a prime location for mating. 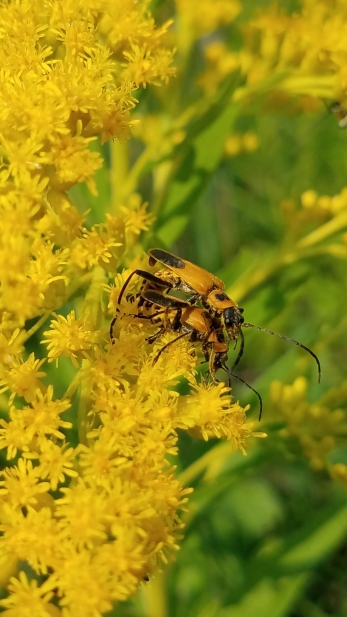 Goldenrod Soldier Beetles are active as adults mostly from July to September, with peak numbers in August.

When not in flight, this moth, with its tightly closed wings, might be mistaken for a beetle. When in flight, it resembles a wasp. It is diurnal, loves flowers, and is a good pollinator. In the next picture, the flower is White Sweet Clover.

Ailanthus webworms are originally native to more tropical areas. They have spread north as they have adapted to different plants to use for their webs/nests and for the larvae feed on. One such plant is the Ailanthus tree (after which the moth is named), commonly known as tree-of-heaven.

In Eliza Howell Park, goldenrods now appear to be the preferred flower for adult feeding. 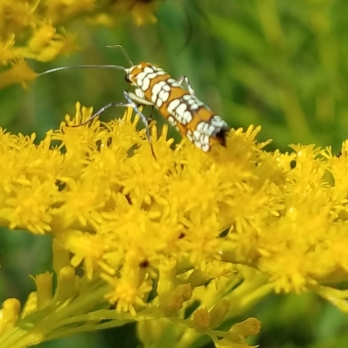 The owl and the pussy-cat sailed to the land where the Bong-Tree grows and danced by the light of the moon. The beetle and the moth came to the park where goldenrods bloom and feed on nectar in the August sun. Bad poetry, but more accessible viewing.