On February 18, 2018, Eliza Howell Park still had the snow-and-ice look that has been typical this winter. This is the view upstream from the footbridge on that day. 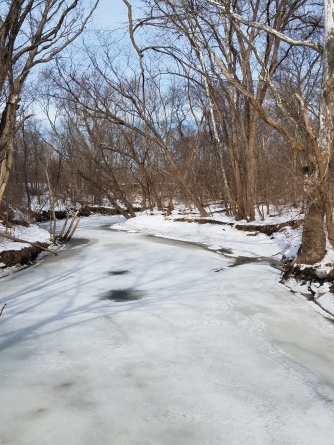 Then the heavy rains came and the snow melted. When I returned to the park on February 21, the Rouge River was at the highest flood level that I have ever seen. This is the very first time, in my thousand visits to the footbridge, that the water was actually over the bridge. 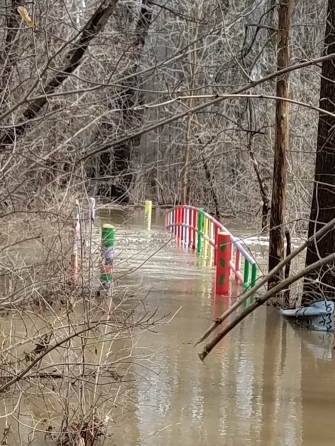 Normally the bridge is perhaps 8 – 10 feet above water level, as can perhaps be seen in the next picture (taken December 1, 2017).

It was not at all surprising that the river this week flooded the bottomland that gets covered whenever the river overflows the banks. What was unusual was the depth of the water there, greater than the typical depth of the river within the banks. 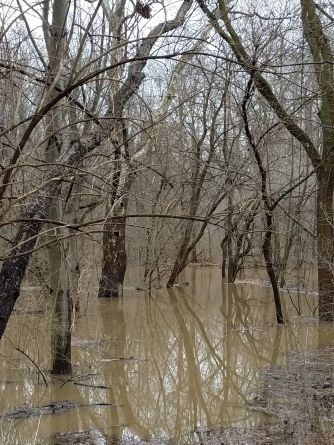 In addition, most of the large wooded area from the footbridge to the southern end of the park at Schoolcraft was under water (the next picture). The entire area of the park flooded was the most extensive that I have witnessed.

After a heavy rain, the Rouge River rises quickly in the park and reaches its peak within a day or less. It recedes quickly as well. The next day, February 22, it was much lower, though still over the river bank. This picture was taken about 23 hours after the one above showing the water flowing over the footbridge. 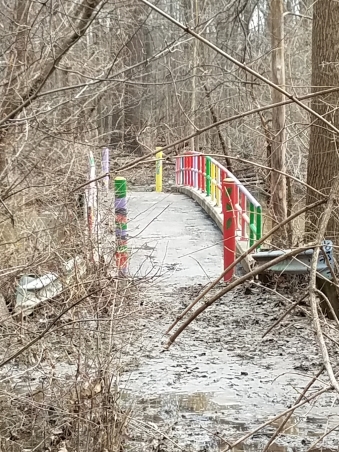 It will be interesting to see how the Flood of 2018 has affected the park – the flow of the river (and the downed trees in it), the vernal pools, the spring woodland flowers that bloom in April, and the walking paths through the woods. We will see.