I have lingered many times during my walks in Eliza Howell Park during the last eight days to watch a pair of Black-capped Chickadees as they excavate a nesting cavity in a small broken-off dead tree. 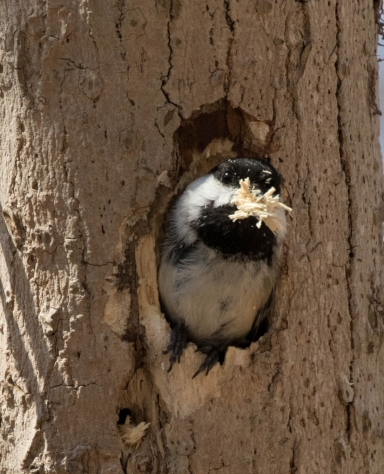 Chickadees are cavity nesters who sometimes select an already existing cavity and sometimes dig their own. When they excavate a new hole, they often try several locations before they settle on one. (Last year they started in one location and then moved; see my post, “Chickadee Nesting Discernment,” May 4, 2018). So I was pleased and excited when it became clear that they were proceeding with this one.

Chickadees do not have the beak and head perfected for hitting wood repeatedly, as woodpeckers have. But, in the right conditions, they get the job done. 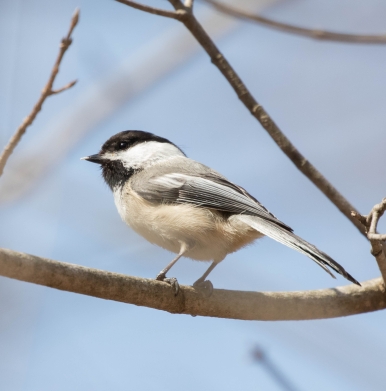 Woodpeckers usually drill their nesting holes in dead trees, but in wood that is solid, not yet rotten. Chickadees, on the other hand, select a snag (standing dead tree) or a stump that is starting to decay. Once they get through the surface, their excavating is not so much chipping away at the wood as it is pulling the soft wood apart. In the first picture above, the bird emerged with a full beak only 3 or 4 seconds after entering the hole.

The snag they are using this year is the small slanting tree in the next picture. The hole is about 10-12 feet high. The fungi on the tree suggest that the tree has been dead for some time. 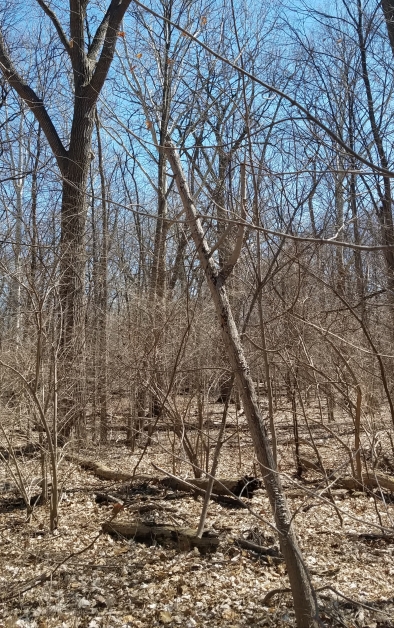 As is usually the case in locating nests, I found the spot by watching where the bird went. The hole was about 1 ½ inches deep when I first saw it.

Two features of chickadee nest-making are worth noting. 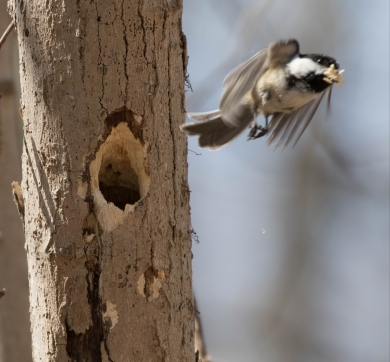 Chickadees dig a bowl-shaped hole about 8 inches deep before nesting. In a tree this size, that means that they will hollow out most of the inside. This drawing, from the naturalist Bernd Heinrich (The Homing Instinct, 2014), helps to show the size and explain why they are still excavating in the second week after they began.

Both female and male excavate, but they will divide tasks in the next phases. The female will make a nest of soft material in the cavity, lay (probably) 6 eggs, and incubate them. While she is incubating, the male will feed her.

I hope to be able to observe some or much of what comes next, but for now I feel privileged to have been able to watch the first step in their nesting.