Even when someone is able to locate a bird nest, that nest is usually in a location that does not allow for a good look inside; it may be in a tree cavity, high in a tree, or deep in a thicket. In my walks in Eliza Howell Park, I have, however, on occasion found nests that provide an opportunity to take a quick look – and quick camera snap – when the incubating adult is off the nest.

Note: Photos of the birds were all taken by Margaret Weber.

Barn Swallows regularly nest on little ledges under bridges and other structures. Their nests are mostly of mud, lined with softer material, including feathers. Cream-colored eggs, with dark splotches, represent a fairly common pattern among bird eggs. Each species, though, is a little different in size and coloring, in addition to having quite different nests.

Bluebirds nest in cavities in trees or in nest boxes. Their practice of using nest boxes that humans provide has helped them recover from very low numbers a few decades ago and makes it possible sometimes to get a look at the eggs.

Song Sparrow nests are well hidden in grasses and weeds and shrubs, sometimes on the ground and sometimes up a little. They are very skilled at not going directly to their nest when someone (like me) is watching. This year is the first time I have found a Song Sparrow nest and it happened when I was walking through tall grasses and the sparrow flew out at my feet. I looked down, pulled out my phone for a quick picture, then left. The eggs are small and they do not all look exactly the same. 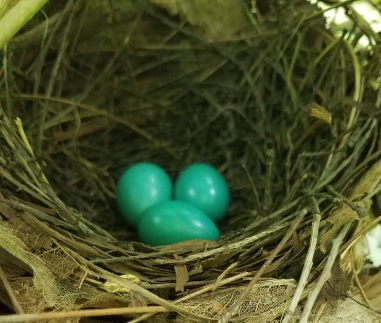 Catbirds nest in thickets and the few nests that I have seen over the years in Eliza Howell Park have been about 6 – 8 feet high. In my experience, the eggs that are only one color, not speckled or splotched, usually have no variation from one to another in the same clutch.

Often my pictures of the insides of bird nests are not great quality photos. One reason is that I take hurried pictures of bird eggs; I do not want to stress the adults. Though absent from the nest at this moment, they likely know of my presence and I want to be gone as quickly as possible. I have often returned some time later and watched from a safe distance. I have been pleased to note that, in every case, the incubating adult has been back on the nest after my one-time quick close-up.

Each year I look for 10 different sparrow species during the month of October in Eliza Howell Park. In the last six years, I have twice seen all 10 and twice seen 9 of the 10.

Note 1: Detroit Audubon is sponsoring a Field Trip at Eliza Howell on October 20, 2018, at 9:00 a.m. Sparrows are among the target birds, as are migrants like Golden-crowed Kinglet and Purple Finch. Non-Audubon members are welcome.

Note 2: All bird photos in this essay were taken by Margaret Weber. 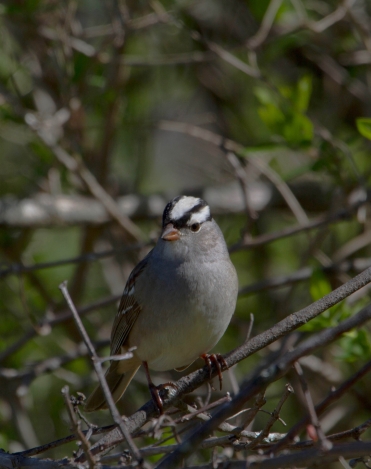 The 10 October sparrows fall into three categories: 1) those that migrate through in the spring and again in the fall; 2) those that are summer residents and are about to leave for the south; and 3) those that are just arriving to spend the winter in Detroit.

Six of the 10 are in the migrant category. White-crowned Sparrow is one. It breeds in north Canada, where it is common, and winters in parts south of Michigan.

Southeast Michigan is part of the breeding range of the Field Sparrow, but I typically see it in Eliza Howell only in the spring and the fall. Thus, I count it as a migrant in relationship to the park. It is a regular brief visitor in October. 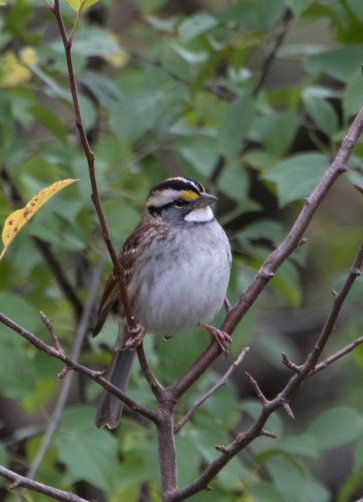 The White-Throated Sparrow is another migrant regularly seen in late September and in October. It breeds in northern Michigan and Canada and winters just to the south. In fact, we are at the northern edge of the winter range and they are sometimes seen in SE Michigan in winter.

Three other migrants that usually show up in October in EHP are not pictured here: Lincoln’s Sparrow, Fox Sparrow, and Swamp Sparrow.

The Chipping Sparrow is one of two summer resident sparrows that are normally still seen in October. It always arrives in April and heads for the deep south states for winter before the end of October.

The Song Sparrow, the other summer resident on this list, is the most common EHP summer sparrow and the closest to a year-round resident among the sparrows. Some years, one or two individuals stay through the winter.

The A. Tree Sparrow is a winter visitor and the one of the 10 that is least reliably seen in October – simply because it sometimes doesn’t arrive until November.

It is a true northern breeder, as can be seen from the range map, taken from the Cornel Lab of Ornithology.

The other winter resident is always found in October in EHP, the Dark-eyed Junco. Though “sparrow” is not a part of its name, that is what it is. It usually arrives early in October and stays until April. Known as the “snowbird,” its arrival signifies to many that winter is coming.

There are two other sparrows (Savannah Sparrow and Vesper Sparrow) that I am likely to see in the park each year, but not on a predicable basis and not in October. Next week is October and I am ready with my sparrow expectations.