Turtles are not common in Eliza Howell Park, especially out of the river, so I was surprised a few days ago to see a large Common Snapping Turtle walking in the woods, headed away from the river. It was clearly a mature adult and my first thought was that it was seeking a place to lay eggs, since they place their eggs in sand or ground to incubate and hatch.

But I quickly had second thoughts: this is too early in the spring for egg laying and it was walking the woods where the ground is entirely covered with dead leaves and not suitable for turtles to place eggs. So I decided to wait to see where it would go and what it would do.

I first approached for a closer look. It was one of the larger snapping turtle I have seen. The carapace (upper shell) was perhaps 13-15 inches long and the legs appeared enormous. I’m sure it is decades old, probably the oldest animal in the park (if you exclude some of us humans).

It stopped walking when I was got close and, though its head and tail are too big to draw entirely under its shell, it closed down to the best of its ability.

I quickly walked away to let it continue and observed the rest through my binoculars. When I first saw it, it was about 50 yards from the river. Over the next hour and 10 minutes, it traveled through lots of leaves, over some fallen logs, though a stump hole, and around trees, but in pretty much of a straight line. Since there is a large vernal pool in the woods in the direction it was headed, I guessed that to be the destination. 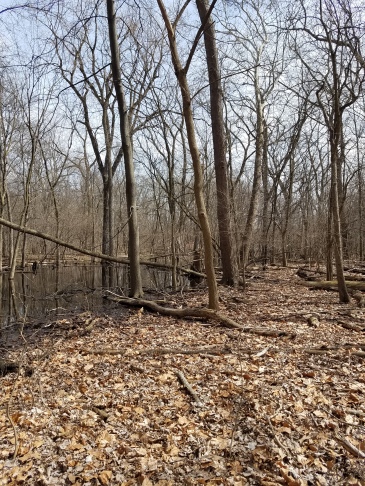 Eventually, it did reach the vernal pool, a total distance from the river of about 200 yards. I think its journey ended when it reached the pool, but I don’t know for sure.

It is in the middle of this picture, apparently just resting in the water.

I am curious about the nature of this trip at this time of the year. Was the snapping turtle returning to its spring “home” after spending the winter in permanent water (the vernal pool dries up late in the summer and snappers spend the winter in water) or was it possibly moving to a new location? I don’t know.

I have seen snapping turtles in Eliza Howell Park on a few other occasions, but I will now be on the lookout for another encounter with this specific big old reptile.