When the bright red and gold leaves of the Fall have fallen by the middle of November, there remains another red and gold attraction in Eliza Howell Park: the fruit of the Oriental Bittersweet.

Though there are still a few remaining honeysuckle berries that the birds have not quite finished, bittersweet can be considered the last fruit of the season. As recently as September, it showed little indication of the starring role it would later play.

Oriental Bittersweet is a vine that was brought to this country in the 1800s and has now spread widely. There is also a native North American Bittersweet vine, but the ones that I watch in Eliza Howell are the Oriental variety. It grows and spreads rapidly and can climb dozens of feet. The next picture shows the twinning nature of the vine; the following one gives an indication of its ability to climb trees.

The outer seed covering totally hides the fruit inside until late Fall. Birds are not attracted until the outer shells begin to open, allowing access to the red fruit, usually after the bittersweet leaves have already fallen.

The gold shell, which opens in three parts, remains attached for a time (contributing to the attractive red and gold look) and later drops to the ground. The red fruit may hang on well into winter. 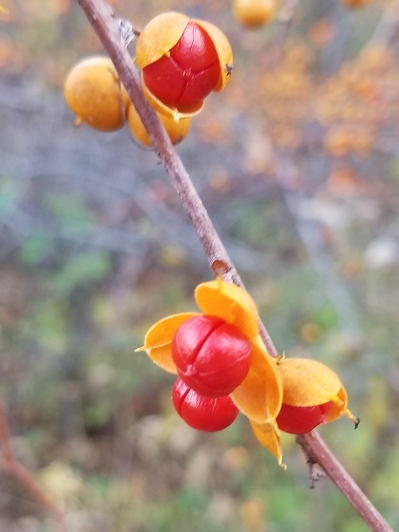 Though Oriental Bittersweet might make for an attractive home decoration at this time of the year, people are rightly advised not to pick and transfer. Unless the seeds are very carefully disposed of, new plants could sprout, spreading the aggressive and hard-to-control vine. It is considered an invasive plant that may damage the environment.

The word “bittersweet” means pleasure accompanied by some negative feelings, sweet with a bitter aftertaste. The pleasure of seeing the red and gold fruit of Oriental Bittersweet can indeed be a bittersweet experience.

The early morning sun was shining and there was a combination of dew and frost on the ground when I arrived at Detroit’s Eliza Howell Park on October 28, 2019. Here are a few images from the next three hours.

Bittersweet vines grow high on some trees in the park, most noticeable when the leaves of the vine turn yellow. 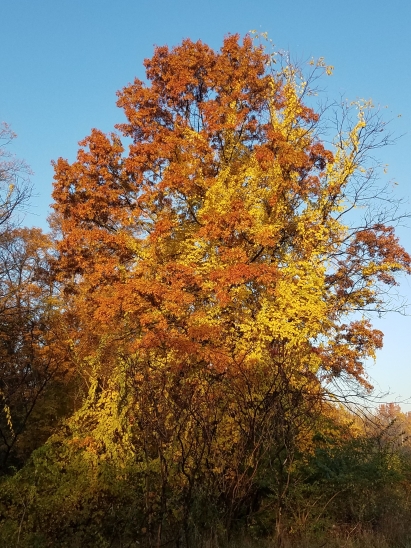 In the blow up, one can clearly see the reflections.

I stopped by a massive Bur Oak that has been estimated to be over 300 years old.

I often take a picture from this spot, looking upstream. The look of the river changes with the season, the sunlight/clouds, and the water level. 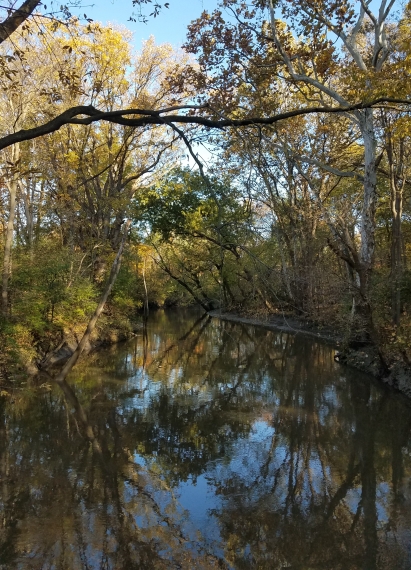 A Walk in the Woods

Several Sugar Maple trees, seen from the park road, have inspired park visitors to pull out their cameras. 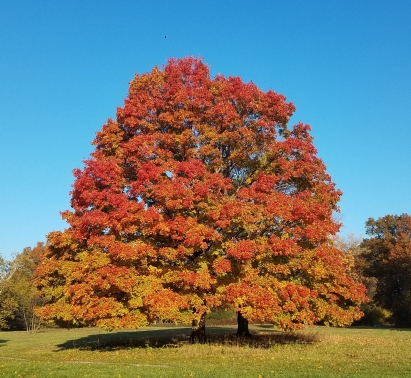 There are some trees, friends, that I stop by to visit to see how they are doing. This Cottonwood tree is one.

This time of the year (the very end of October and early November) is the best time to see House Finches in Eliza Howell Park. It is one of two good times to see Cedar Waxwings. And it is the only time to see Purple Finches here. These are fruit-eating birds in this season and Eliza Howell Park has berries that they enjoy.

As I walked the path from the road toward the river recently, I began to hear American Robins. Robins, too, are primarily fruit eaters in this season, so I knew to look in the patches of honeysuckle in this area, shrubs now loaded with red berries.

This is Asian bush honeysuckle (Amur honeysuckle), with lovely white flowers in the spring and red berries in the fall. It keeps its leaves longer than most deciduous plants, and is right now, in early November, mostly green with abundant berries. Robins, in the dozens, are one of several bird species feeding here.

Cedar Waxwings are a little less predictable than robins, but also present in good numbers most days. This is an adult. 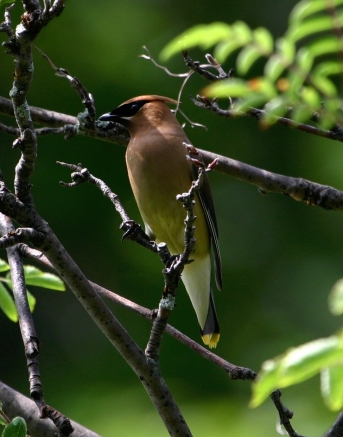 Cedar Waxwings are always a joy to see. Some Waxwings still have immature features in the fall, but they also sport the very adult-looking yellow at the tip of the tail. The other time waxwings are common in the park is in August, when the fruit of the wild black cherry trees is the attraction that brings them.

One bird that can take my attention away from waxwings is the Purple Finch, for two reasons. 1) It is only present in the park, in my experience, in small numbers during a couple weeks beginning at the end of October. It breeds to the north and migrates through; for some reason, I do not see them in spring migration. I always try to get good looks while I can.

2) The second reason for focusing attention on (what appear to be) Purple Finches is that it is often necessary to look twice to see if the bird really is a Purple Finch. House Finches are also present and it is often difficult to tell the two apart when they are not posing out in the open.

The males within each species (these pictures are of males) vary from one to another in color, in how much red they have. Females are very different from males (no red at all) and there is also a definite resemblance in the females of the two species.

House Finches are in this region throughout the year, but this time of the year is by far the best time to see them in Eliza Howell. 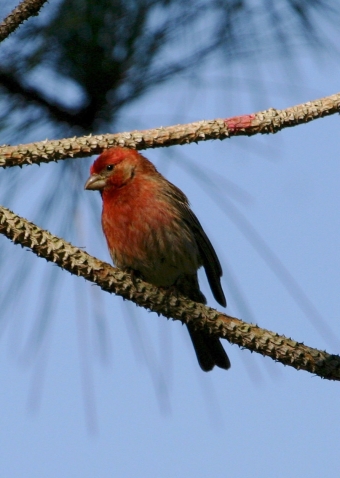 There are also other birds attracted to the berries – and there are other berries attracting the birds. One of the most common vines growing in the park is Oriental Bittersweet. Bittersweet can often be found along the edges of wooded areas, where it is can cover small trees and shrubs.

Bittersweet fruit is yellow looking until it opens in the fall to reveal the red berry inside. Then more birds come. 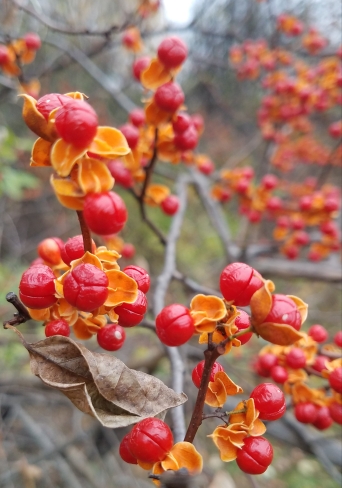 There are many dark cloudy gray days in early November in Detroit, but the berries and the birds they attract make the days brighter.

In late August and the first part of September, I often find myself visiting five different large perennial climbing vines that are found in Eliza Howell. I am watching the fruit develop and ripen.

Virginia Creeper berries have just recently completed the transition from green to blue.

These berries are eaten by many birds and some mammals, but humans are warned against eating them because of their toxicity.

Virginia Creeper is a woody vine, native to North America, and is found in forests and on the borders of clearings. The next picture is of a vine growing on a dead tree by the river.

Many people are surprised when they first see the fruit of Porcelain-berry; we do not expect fruit to be multicolored. 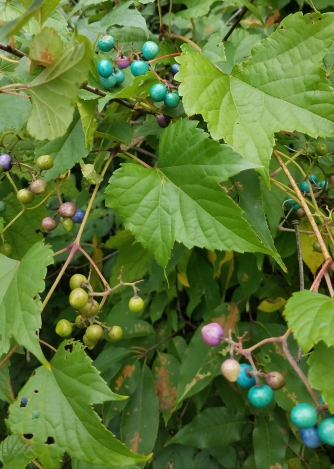 These berries are reported to be safe to eat, but not very palatable. I have not yet done my own taste test.

Porcelain-berry was first imported from East Asia as an ornamental about 1870. The vines grow vigorously (apparently spread by birds dropping seeds) and can choke out other plants, including trees. It is becoming widespread in Eliza Howell, blanketing sections along open areas. 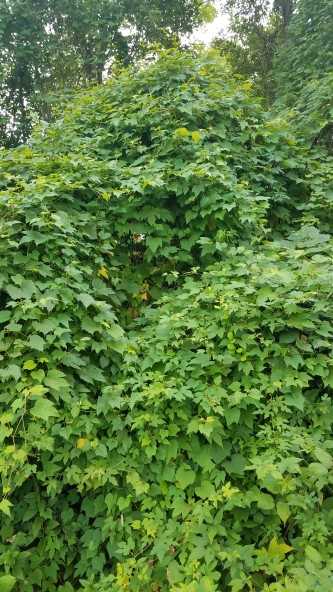 The fruit of this vine ripens later in the year than that of the others here. Currently, it looks like this.

Also brought to the U. S. in the 1800s, Oriental Bittersweet also has the capacity to spread rapidly and to smother other species. It is not as widespread in the park as Porcelain-berry, but it is common.

Later in the Fall, the yellowish outer skin of the fruit opens to reveal the red seeds. They often hang on the vines well into the winter, when they can be an attractive addition to an after-the-snowfall scene. This picture is from early last November, not too long after they began to open.

Poison Ivy is, of course, best known for causing a painful itchy rash for most people who touch the plant. Since getting close to the plant is usually avoided, many do not know what the fruit looks like. I have been (carefully) observing how it progresses and this is what it looks like now. 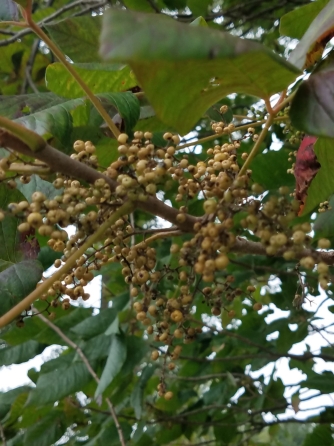 Poison Ivy vines grow high on a number of large trees in the park, with the foliage turning red in the Fall, often while the leaves of the host tree are still green. Some red is already starting to appear. 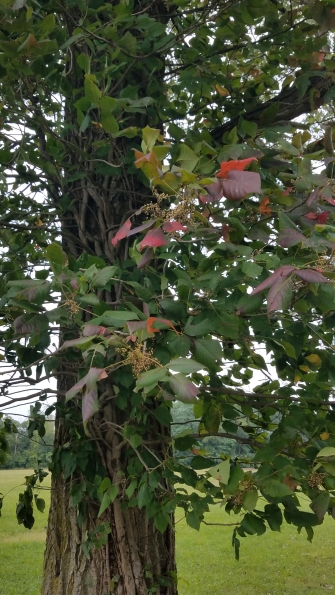 I earlier did a post on the grapes of Eliza Howell (“Vinland,” August 9, 2018), so will not repeat that information now, but simply point out that this is what the grapes look like now.

Three of these large woody vines are native to North America; two were imported for gardens and “escaped” to the wild. Together, these five cover significant sections of the edges of wooded areas and climb many trees in the park. I find that this is a good time of the year to get to know them better, when their fruit clearly identifies them.