I see Oil Beetles — large, dark, metallic-looking beetles – in Eliza Howell Park only in October and November. They are not particularly photogenic or otherwise likely to catch someone’s attention, but their story is part of the fascinating natural world that exists right here in the neighborhood.

Oil Beetles, a type of Blister Beetle, are nearly an inch long and, when I see them, are walking slowly on the ground in or near the fields in the park. My earliest 2019 observation was on October 17 (next picture). They are not numerous; even in their “season” I do not see them on every visit.

Oil Beetles are flightless. The adults emerge in the Fall and proceed in their slow and somewhat cumbersome walk toward a good place to winter in the soil. Based on the published research I have consulted, I think the female lays eggs in the spring, but I have seen them mating in the Fall. This pair was photographed in early November. 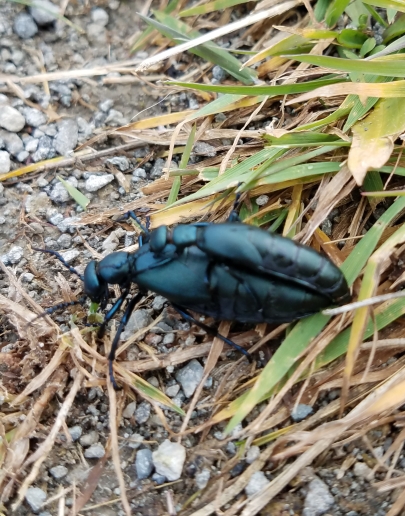 They are called “Oil” Beetles because, like other Blister Beetles, they can secrete oily droplets from their leg joints when threatened. This “oil” contains a toxic chemical (cantharidin) that can cause painful blisters on human skin.

They have no hind wings and the short front wings cover only a small part of the large abdomen. 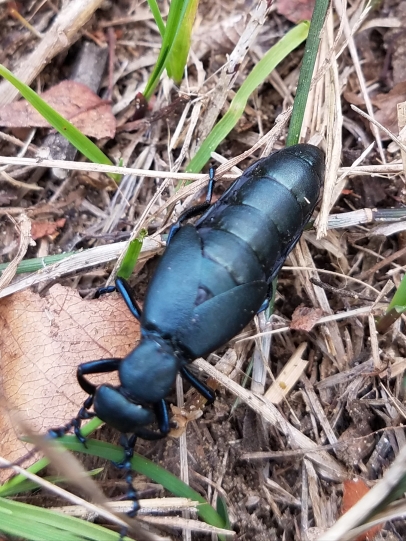 Some Oil Beetles spend the immature phases of life in parasitic fashion in the nests of ground-nesting bees, eating the food that is brought in for bee larvae.

There is much I don’t know about these beetles, but they now have my attention. I am sure that I will think of Oil Beetles when I next see ground-nesting bees. 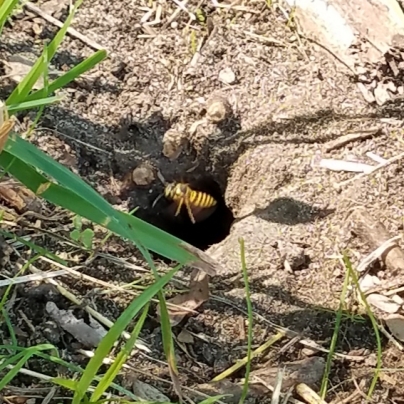