As part of my on-going effort to become more familiar with the behavior of the birds of Eliza Howell Park, I pay special attention to their breeding habits. Last week I commented on my so-far unsuccessful attempts to locate a Wood Duck nesting cavity. Since then, Killdeer, another of the March arrivals, has made its annual appearance.

I have had more success in locating Killdeer nests, though this is also a big challenge. Killdeer nest on the open ground, in a small depression with no nest structure. The nesting birds are so well camouflaged that they can only be seen when they move. And, like Wood Ducks, the young leave the nest immediately after hatching, so there is no feeding activity to help one locate the nest.

Killdeer nest very early in the year, before the ground plants grow. In each of the areas shown in this picture, I was able to locate a Killdeer nest, in three different years. 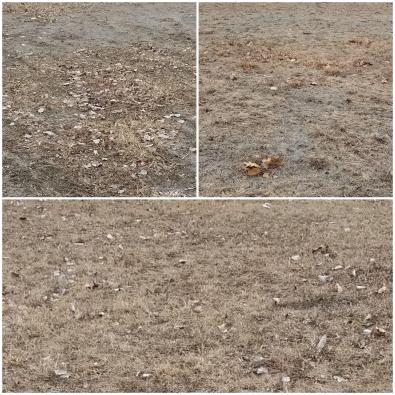 I found this nest (next picture) by using the nest-hunting method I usually employ for Killdeer:

This strategy takes a lot of time and patience, but it often works.

Nest-finding method # 2 is not really a method at all. I refer to it as serendipity, making the discovery more or less by accident, by being in the right place at the right time.

Two years ago I was walking across the field in April with a park visitor, heading toward an area where I had been observing Killdeer. All of a sudden, a Killdeer few out from three feet in front of us. Looking down, I saw that we had almost stepped on a nest, at least 50 yards from the area I thought might be their nesting site.

After a quick picture, we left the area so that incubation could resume.

Killdeer nest regularly in Eliza Howell, but, as far as I can determine, only one or two pair a year. They nest early and usually in the area of the park that is mowed. In some years, I am concerned that the eggs might not hatch before mowing begins.

Killdeer probably have another brood later in the nesting season, but I have not yet located a nest after April.

The pair that arrived within the last few days has already been engaged in mating activity; they are likely to nest soon.

And I have started my watching, noting that they seem to be favoring an area that has the kind of gravelly ground that Killdeer often like for their nests. I will be back, multiple times.

And, if my patient watching doesn’t confirm a nest, maybe I will discover one by method # 2?

It was on “the eighteenth of April, in seventy five” (in Longfellow’s poem) that “the midnight ride of Paul Revere” occurred, when he spread the alarm that the Redcoats are coming.

As the first of March approaches every year, it is time to announce, with eager anticipation instead of alarm, that the Red Wings are coming to Eliza Howell Park (the Red-winged Blackbirds, that is, not the Detroit professional hockey team).

Usually the first of the summer residents to return for the breeding season, Red-winged Blackbirds often arrive when winter is still very much present. Twice in the last 10 years I have seen the first of them on February 27.

The males seem to be in a particular hurry to claim a breeding territory. 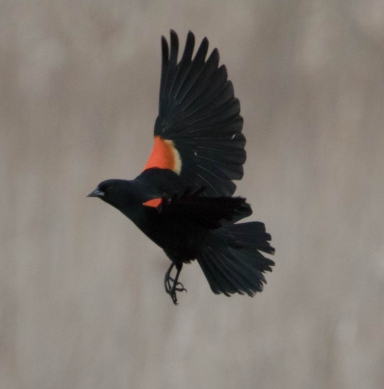 Note: The bird photos here are all by Margaret Weber.

As I enumerated in a posting last year (“The March 10 (or 11),” February 22, 2018), the bird population in the park begins to grow rapidly in March. Among these early arrivals, the Red-winged Blackbird is usually the first and often the most easily visible.

The males arrive before the females, who might not make it till late March. These females will find the males, with their bright red patches and singing loudly, ready to welcome them to the territories they have claimed.

Females look very different. In fact, it can take some experience to identify them as the same species; they resemble sparrows in some ways.

As can be seen from the range map, most RWBs winter in the states and some do not have far to travel to reach Detroit before spring does. (The map is taken from the Cornell Lab of Ornithology.) 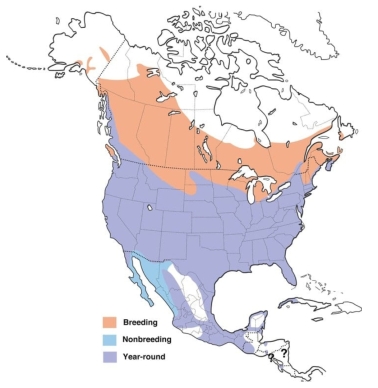 In Eliza Howell Park, there are several nesting “pairs” each year. I put “pairs” in quotation marks because this is a species that does not breed as a simple one-male one-female pair. The male often mates with and protects several females in his territory and genetic studies have shown that quite frequently the nestlings are not all sired by the territorial male.

In marshes, Red-winged Blackbirds often nest in cattails. Outside of the marshes, and in Eliza Howell Park, they nest in tall grasses or in shrubs and small trees. The nests are open on top and often have 4 eggs. I found this nest in May a couple years ago.

The picture is not very clear because I didn’t linger long enough to get a good shot. Red-winged blackbirds are very aggressive in protecting their territory and their nests. They chase much larger birds and animals of all sizes, including humans. It is advisable to have head protection of some sort when walking near nesting Red-winged Blackbirds. It is common to experience “dive bombing” that seems to be aimed directly at the head.

They come flying, not just to impress females, but also to protect against intruders.

The Red Wings are coming. The spring birding season is beginning.