I usually call them all “thorns,” all those sharp, pointed, stiff parts of plants that we usually become most aware of when they scratch, prick, or snag. Winter, with the absence of leaves, is a good time to look more closely at the branches and stems of the plants in Eliza Howell Park and to note the variety of “thorns.”

True thorns, botanically speaking, are modified branches. In EHP, they can be found on such trees as hawthorn (first picture) and buckthorn (second picture).

Thorns grow from deep in the woody structure of the plant and are not easily broken off.

Prickles are also sharp outgrowths of plant stems, but they tend to be shorter. And, because they grow from the outer layers of the plant, they are more easily broken off.

I encounter prickles in Eliza Howell most often in berry patches (and prickles account for most of my scratches). This picture is of a wild blackberry cane.

The plant that is most commonly recognized as having “thorns,” both historically and currently, is the rose. As in the French proverb (“No rose without a thorn”), the beauty of the flower is often contrasted with the hurt or risk from the thorn.

It does not sound quite the same to say it, but if we were to be scientifically exact, we would call roses prickly, not thorny. Rose “thorns” are prickles.

This picture is of the stem of a wild rose in Eliza Howell and the following one is of a garden rose.

Spines are not easy to find in winter because they grow from the leaves and fruiting part of plants and drop with them in the fall. They tend to very thin and, while they might bend, they are often very sharp.

Note the spines on the thistle. 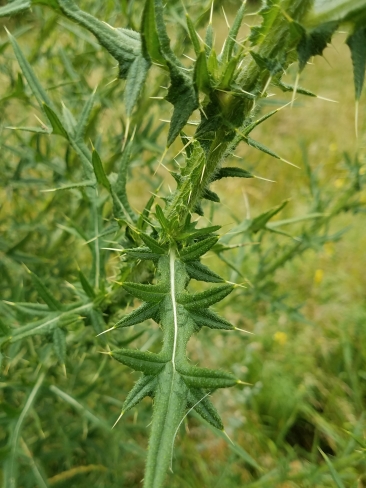 I often warn field trip participants to be very careful when grabbing hold of a chestnut; the spines on the bur (outer shell) are sharp. 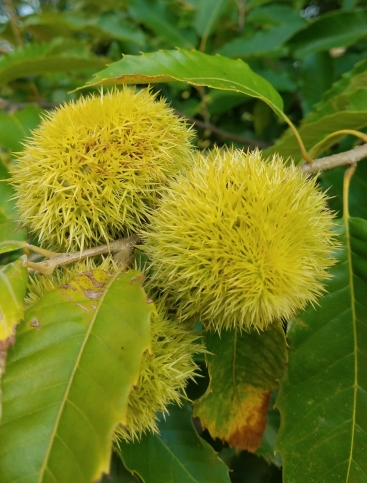 Thorns, prickles, and spines all seem to have similar function, to help protect plants from herbivores. They simply take somewhat different forms.

I do not propose that we stop using the generic name “thorn” to apply to prickles and spines as well as to true thorns. I find it of interest, however, to note their differences. It is another little insight into the fascinating variations that exist in the natural world.

I arrived in Eliza Howell Park on October 9, 2018, at about 8:20 a.m. It was already warm, very warm for this time of the year, after a heavy dew. For the next three hours I walked about with my binoculars and phone camera, with frequent stops.

These are some of my observations on what is happening in the park today.

When the morning sun shines, it highlights the wet twigs and leaves, and the moisture rises in the air like fog. The temperature was unusual for October, but the picture is not. 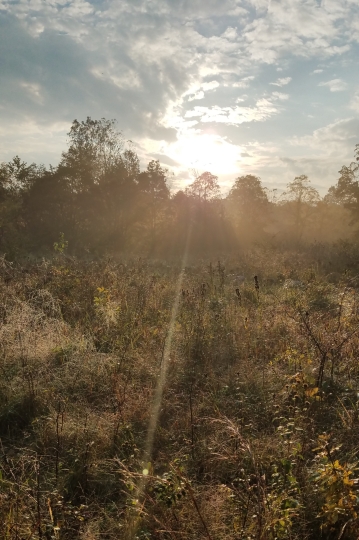 There are many honeysuckle shrubs (Amur honeysuckle) in the park. They have lovely white flowers in the spring, but are perhaps even more attention-getting in the Fall. They keep their leaves longer than most deciduous plants and will be mostly green with abundant red berries into November. They have been ripening slowly and more are red every day.

I recently posted a report on some of the mushrooms in the park (October 4, 2018). Mushroom season continues and, in the last few days, there are even more to be found, in many shapes and sizes. This is just one of many I thought photo-worthy today.

As I noted in another post (September 28, 2018), part of my October focus is on the variety of sparrows that pass through the park. This morning I saw six different sparrow species, including a flock of Dark-eyed Juncos and my first-of-the-season Field Sparrow (pictured here in a photo from another time).

Monarchs have been in migration to Mexico for about a month now and I have been checking for them during each visit to the park to see whether there are any still present. Today I saw 4. So they have not yet all passed through, though that will happen soon.

I thought today of the Monarch caterpillar that I saw on September 12 (picture) and wondered then whether it would have time to make it to butterfly in time to head to Mexico with the others. Perhaps it is now on its way. 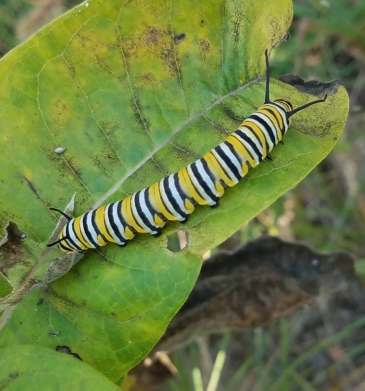 Many, maybe most, of the nuts and acorns in Eliza Howell have already fallen. When mature chestnuts fall, the outside shell (the burr) opens on its own – to the benefit of squirrels and others. Many empty burrs are now on the ground under the trees. Sometimes the burrs open before they fall; this one is still on the tree, with two of the three nuts having dropped. (For more about EHP chestnuts, see post of July 31, 2018.) 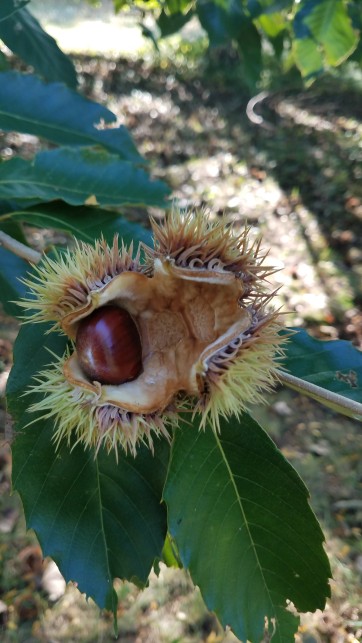 7.Tree leaves are starting to turn.

Except for the species whose leaves turn red early (such as staghorn sumac and Virginia creeper), most of the leaves in the park are still green in early October. Today, however, there are definite signs that the change has begun on some of the large deciduous trees.

Bald-faced hornets often build nests in a number of trees scattered around the park. I typically see 10 or more each year, starting to spot them in late summer but finding most in the fall when they become more visible with the leaves thinning or gone. This year I had only seen one so far, a small one, found on August 17 and pictured here, and have begun to wonder whether this year might be atypical. Today I (finally) found a second one.

Anyone visiting the park in late summer or early fall is likely to notice the hue of the foot-high plants called purple love grass. When the grasses dry up, they (now brown) detach and blow across the ground like tumbleweed. Tumbling is now starting to happen. (The picture is from mid-September.)

The terrestrial snails common in Eliza Howell (perhaps a type of banded snail) have been active since April, when they emerged from hibernation. They seem to be especially abundant right now, climbing up several feet on plant stems (they feed on both live and dead plants). Here is a collage of four I saw today. 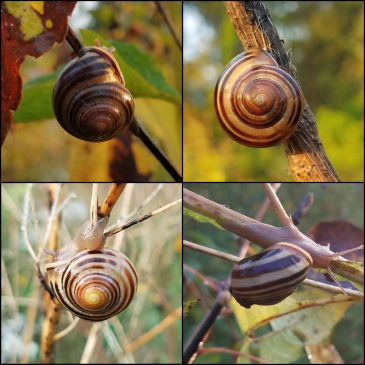 These are some of my notes from a morning walk in the park.

Even though I am a septuagenarian, I am too young to remember the days when American Chestnut trees were a very common hardwood tree in the forests of the eastern United States. The “chestnut blight,” a fungus-infestation, wiped out nearly every one of the estimated 4 billion (billion!) chestnut trees in the first 4 decades of the 20th century.

Most of us are somewhat familiar with Horse Chestnut (Buckeye) trees, but they are quite different. The nut of Horse Chestnuts is not edible, while chestnuts are known for “roasting over an open fire.” I don’t think I ever saw chestnuts growing on a tree until I came to know them in Eliza Howell Park.

This is what the developing nuts look like at the end of July.

The nuts are developing now. Most are ripe and fall to the ground in September. The outside shell, often called a burr, has many very sharp spines (not to be grabbed with the bare hand), though the spines are still soft in July. When they fall to the ground, the burrs usually open on their own, revealing the brown hulls of the nuts inside. In the Eliza Howell trees, each bur normally has three nuts.

These are true chestnuts, but I do not want to mislead. They are not surviving native American Chestnuts. The two clumps of chestnut trees found inside the road loop were probably planted here some 30 or more years ago, I am guessing. This picture shows two (in a clump of three) close to the walking path.

The fact that these trees have several trunks, not just a single one, suggests that they are an oriental chestnut species, originally from either Japan or China.

The season is relatively short. Blossoms appear in June, with separate male and female flowers, both of which can be seen in the picture.

In October, the fruiting season is over, with the last nuts falling as the leaves begin to turn. 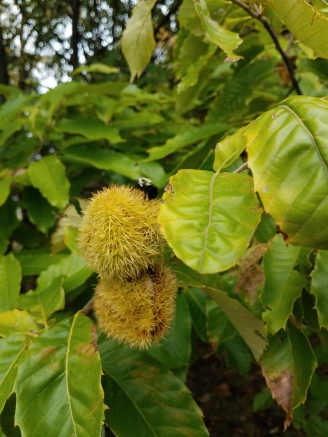 There are on-going efforts to develop American Chestnuts that are resistant to the blight. These efforts may make it possible for us to see American Chestnuts in parks and forests in the future. Meanwhile, these imported chestnuts provide the opportunity to get to know something about what chestnuts are and how they fruit.

Visitors to Eliza Howell Park can find them right along the walking path within the road loop.