The second of the annual Detroit Audubon field trips to Eliza Howell Park takes place on Saturday, September 7, 2019, starting at 8:00 a.m. The public is invited; there is no cost.

Timed to coincide with the early days of the Fall bird migration, this walk give special attention to birds, especially warblers headed from the North Woods to Central and South America. Depending upon the weather conditions, we are likely to see several warbler species, perhaps including these three. (Thank you to Margaret Weber for these three photos.) 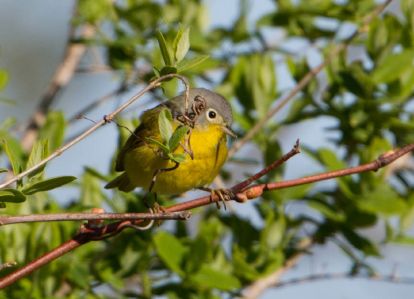 The fall warbler migration begins at the end of August and continues into October, with individuals of some 20 different species making short stops at Eliza Howell. The find from one day to the next is almost always different.

If September 7 is a good day, the birds will keep us quite busy, but we will also stop for non-bird observations. This is about the best time of the year to note the variety and nature of spider webs among the wildflowers and the shrubs. They vary in sizes and shape; this is a small one on a thistle. 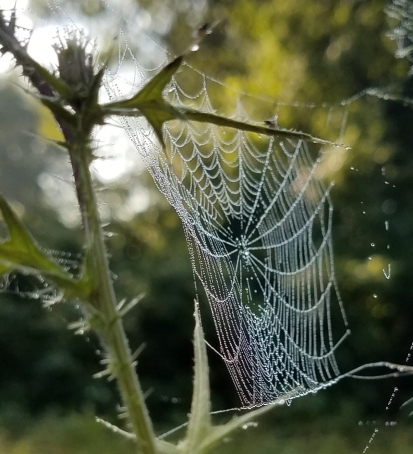 September is also the month when I most frequently see a Praying Mantis (or 2 or 3). They have reached maturity and may be seeking mates and/or laying eggs. (I wrote about “Praying Mantis Egg Laying” on September 13, 2018.)

Butterflies continue to be present. One of my favorite late-season butterflies is the Common Buckeye, which makes it appearance in Eliza Howell after the July butterfly peak.

I usually find several Bald-faced Hornet nests in the park each year, beginning about this time. We may want to stop for a look (through lenses) to watch the hornets enter and exit the hole near the bottom of these amazing constructions. (For more, see “Bald-faced Hornet Nests,” December 12, 2017.)

Blue Jays migrate in September and many spend days at Eliza Howell harvesting acorns, from the middle of September into October. (For more information, see “Blue Jays Harvesting Acorns,” August 27, 2018).

September 7 might be a little early to see them at work, but we will check (this photo also courtesy of Margaret Weber).

The seasons repeat themselves, so it is possible to predict what might be seen at any given time of the year. But it is also true that every day is different and almost every walk includes an element of the unexpected. Such is the nature of nature walks. September 7 should be fun.

Blue Jays have been a major presence in Eliza Howell Park during the last month, the time of their fall migration. Each year I anticipate their acorn harvesting frenzy (see “Blue Jays Harvesting Acorns,” August 27, 2018) and this year they again worked the oak trees in great numbers.

Their month-long period of intense activity in Detroit is exciting to observe, but I am increasingly aware of their unusual – and not fully understood – migration behavior.

Most birds that migrate through our area in the fall leave all or much of their breeding ground for the winter. Blue Jays, by contrast, are found in the very same areas all year round. It is interesting to compare the following two range maps. The first is White-throated Sparrow, also moving through here in September, and the second is Blue Jay. (These maps are taken from the Cornell Laboratory of Ornithology website.)

Blue Jays are found throughout winter in the very same areas in which they breed. A few scatter to the west, but the entire breeding area remains occupied.

Such a range map usually suggests that a species is non-migratory. Blue Jays, however, migrate and do so in great numbers. Every fall the raptor counters at the two locations by Lake Erie (Detroit River Hawk Watch at Lake Erie MetroPark and Holiday Beach Conservation Area in Amherstburg, Ontario) count Blue Jays as well as raptors. As of October 10 this year, Holiday Beach watchers had reported over 350,000 Blue Jays moving through since early September. And the migration wasn’t fully over yet.

This is what is known (and/or thought likely) about Blue Jay migration, based on my review of some of the published research:

The jay numbers will soon decline in Eliza Howell as the migrants move on. But I do not know whether individual birds like this one, seen in an oak tree in September, will stay for the winter.

I do not know whether this one, nesting here in June, will be around in the coming winter

I had assumed, if I thought about it much at all in the past, that the same birds (the non-migrants) were present in summer and winter and the migrants all passed through. Now I doubt that.

One of my other questions, not addressed in the limited research I have reviewed, is whether some of the individual jays harvesting acorns in the park leave/migrate before the winter and do not ever go back to eat the acorns they hid. Is acorn harvesting possibly community and not just individual food-gathering?

The Blue Jay is a common bird, so it is tempting not to give it a second thought. But I rarely see jays these days without thinking about what I do not know about them.