Having learned recently about the effort to determine the approximate age of a large Bur Oak tree in the Rosedale neighborhood of Detroit, I decided to use the same method to arrive at an estimate of several large trees in Eliza Howell Park.

Anyone interested in assisting in this project is welcome: Sunday, November 11, at 1 p.m.

Please email if you are intending to come (so I can let you know if there is a late need to reschedule because of weather): leonard.weber9@gmail.com

This Pin Oak is one to be measured. 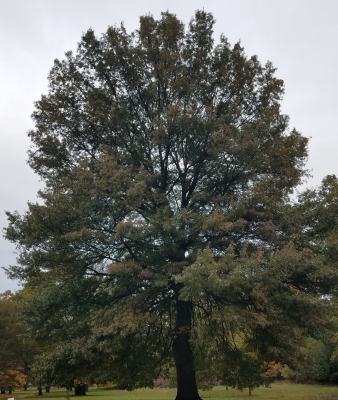 The following steps are followed to get a non-invasive estimate of a living tree’s age:

Another of the trees I plan to measure is this American Sycamore.

I am hoping to measure about 8 large trees, different species, ones that are often noticed by park visitors and participants in nature walks. At present, when I am asked “How old do you think that tree is?” I can only give a general response.

This Eastern Cottonwood, the location of a Baltimore Oriole nest every year, is also on my list of trees to be measured. 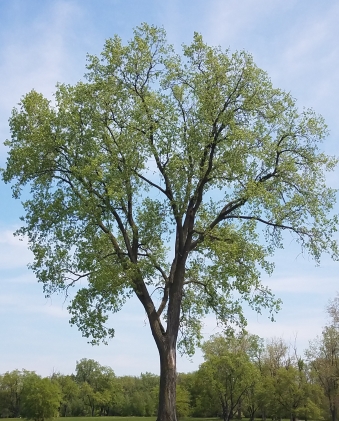 I have been asked specifically about the approximate age of the Bur Oak (next picture) at the edge of the path leading down to the floodplain.

In my initial use of this formula for estimating tree age, I have found that not all online sites of growth factor information have the same number for a particular species. It will be necessary for me to do more research before November 11 in order to determine the most appropriate numbers to use.

As I noted in a February post (“Beech Trees and Beechnuts”), Passenger Pigeons used to eat many beechnuts. I am wondering whether this American Beech is old enough to have been visited by those legendary birds.

As I get to know more about the flora and fauna of Eliza Howell Park, I realize how much more there is to know. And I look forward to this learning project.

The American Sycamore trees in Eliza Howell Park may not be very evident during the summer months or in the fall color season, but they stand out from November to April, when most deciduous trees are leafless.

In old growth North American forests, sycamores grew massive trunks, up to 10 feet or more in diameter at times, perhaps the largest trunks of any native hardwood tree. These trunks, often hollow, were used by Chimney Swifts for nesting and roosting before large chimneys were built – and large trees were cut down.

Sycamores thrive in moist woods and near rivers, which makes Eliza Howell Park a great location for them. The sycamores in the park are not old growth, of course, and are no larger than other trees. It is the bark of the branches, not the size of the trunk, that calls attention to the sycamore in winter. The upper part of the tree often appears nearly white. 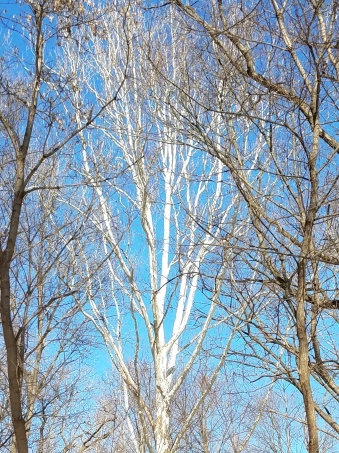 The sycamores are not the most common tree in park but are scattered, both in the woods and in the open area. As with other trees, in the open, when they do not have to stretch high to get sunlight in the woods, their branches spread more. Note that the trunk close to the ground does not look noticeably more white than most other species. 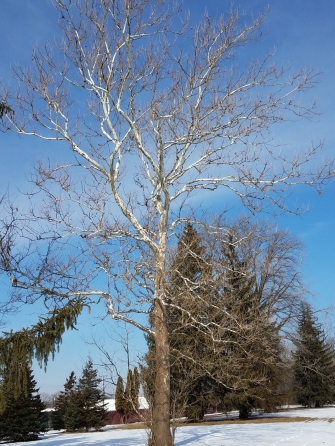 Sycamores are sometime used as shade trees in yards and along streets and this winter a neighbor called my attention to a fascinating phenomenon. One street in our Detroit neighborhood is lined with sycamores on both sides for several blocks. In the very cold spell in early January, many of them had large vertical splits in the trunk, often more than six feet long.

Based on a little research, I think these are “frost cracks.” They occur, usually on the sunny side of the tree (south, or southwest) in very cold sunny weather, on thin-barked trees like sycamore.

The cracks normally close over as the weather gets a little warmer and are not fatal to the tree, though they may re-open in other winters and they leave a callous over the crack.

The next picture is of the same tree as above and was taken in the middle of February, exactly one month after the picture above.

I had never seen such a frost crack in the sycamores in Eliza Howell, but after viewing the neighborhood trees, I went back and took another look. Not a single one that I checked in the park showed any evidence of such cracks, this year or in the past. This one is typical of the sunny side Eliza Howell sycamores.

So what is the explanation? Why are the street-lining sycamores more susceptible to frost cracks than those in the park? I don’t know. But I do have an initial hypothesis. Trees planted in the narrow berm between street and sidewalk are not in as healthy of a growing environment – drier and with more rapid changes in temperature – as those in a woods or park. They are more susceptible because of these stresses.

That’s my working hypothesis until I learn more. What I do know is that I continue to enjoy viewing the sycamores in Eliza Howell Park even this late in winter, when I am looking for early spring birds.