I don’t see them on every summer walk in Eliza Howell Park, but I always look twice when I do.

There is much to like. The Great Golden Digger Wasp is colorful, impressive in size, and not a stinging threat.

Wasps are often described as “social” or “solitary.” Social wasps nests in colonies with a queen and the workers aggressively defend the nests. Yellowjackets and Bald-faced Hornets are examples of social wasps.

The Great Golden Digger Wasp is a solitary wasp. Females make their own nests individually (digging holes in the ground) and, once eggs are laid, do not defend the nests. Humans are not perceived as a threat.

The adults feed on nectar.

Lately, a favorite nectaring flower has been Culver’s Root. Here they are easy to see and are near eye level. Knowing that they are not a threat to sting (unless I do something like grabbing one!), I try to get close ups, close enough to see the golden hair on the head. 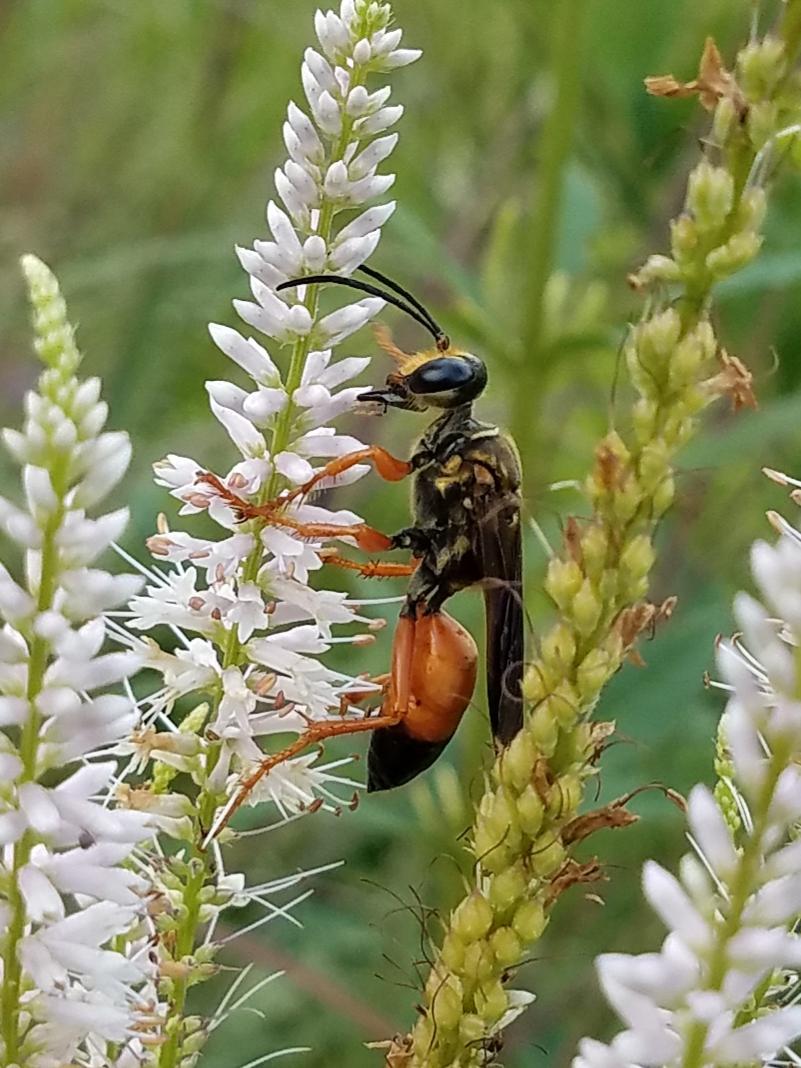 This wasp is not a stinging threat to humans, but the nesting female does sting other insects. I have not yet been able to observe their nesting behavior in Eliza Howell, but the following is the reported practice.

After digging a vertical hole in the ground, with several side cells, the female hunts a katydid or cricket or similar insect. She stings it, paralyzing it, transports it to the nest, and places one in each cell. On the body of each  living but paralyzed insect, she lays an egg, then seals the hole. After the egg hatches, the larva eats the stored food before going into a cocoon to spend the winter.

The new adults emerge in the late spring or early summer for an adult life that usually ends in August. The first one I noted this year was nectaring on a milkweed flower.

There is only one generation a year. I have enjoyed getting many good looks this year. Perhaps next year I will have an opportunity to observe the nesting behavior the Great Golden Digger Wasp.