The completion this month of 15 years of bird watching in Eliza Howell Park (180 consecutive months and over 1370 different records) Park makes this a good time to review the seasonal presence of different bird species. Based on experience, I know fairly well which species I can expect to see in the park at any given time of the year, in any particular 2-week period. These can be considered Common for that particular “season.”

And I know the species that I do not usually see on my outings at a particular time of the year, but am not surprised when I do see them. These are Occasional birds, birds that I can expect to observe some years during this season, but not most years.

The current “season” is the first two weeks of December, a period of time characterized by cloudy days, with leaves on the ground but very few remaining on trees.

At this time of the year there are no flowers blooming, no developing seeds or fruit, little evident insect activity; I tend to concentrate my observations on mammals and, especially, on birds. 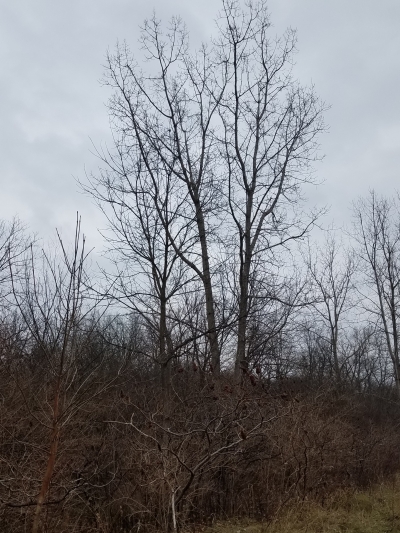 Recent sightings of two occasional bird species led me back to my records. The first is a Golden-crowned Kinglet, only the fourth time in the last 15 years that I have seen this bird in the park in December.

In my listing of Eliza Howell birds, Golden-crowned Kinglet is identified as a Migrant, a bird that passes through the park in the spring and fall each year, but is not present in either the summer or the winter. It is a late fall migrant, usually seen well into November.

As can be seen from the range map below (from the Cornell Lab of Ornithology), the southern part of Michigan is within its winter (nonbreeding) range. Some Golden-crowned Kinglets can be seen in southern Michigan in winter every year, but my interest here is specific to Eliza Howell, the habitats in this particular location at this specific time of the year. Here it is occasional.

The second occasional December bird recently seen is Eastern Bluebird. Bluebirds are Summer Residents, breeding in the park. They have become more common in recent years.

This is only the third December I have seen a Bluebird in Eliza Howell. However, two of these three years are 2018 and 2019. As the species becomes more common during the breeding season, it may also show up on more occasions during the winter.
Similar to Golden-crowned Kinglet, the winter range of Eastern Bluebird includes southern Michigan, though most individuals migrate further south. (This map is also from Cornell.) 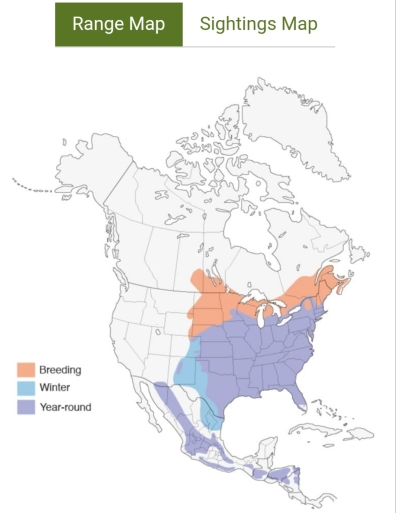 I typically see about 24-25 different species in the park in December, most of which are the usual Eliza Howell birds of winter: Northern Cardinal, Red-tailed Hawk, Red-bellied Woodpecker, Dark-eyed Junco, Black-capped Chickadee, Mourning Dove, etc. They brighten the gray days.

The occasional appearance of a different species adds to the brightness and adds to my knowledge about what to expect when.