On almost any extended walk in Eliza Howell Park at this time of the year, I come across caterpillars.

Woolly Bears are famous because their appearance in the Fall has long been used to try to predict the severity of the coming winter: the wider the middle rust-color band, the milder the winter, according to folklore.

They are now leaving the plants where they have been feeding and are on the move to find the right location to spend the winter. They remain in caterpillar form all winter long (surviving actual freezing) and go through the pulpa stage in the spring before emerging as adult moths. Isabella Tiger Moths are tan-colored and active at night; the caterpillar is much better known than the adult.

Here are a few seen recently.

There are other fuzzy moth caterpillars in EHP these days. In the collage below, the two on the left are, if I have correctly identified them, two differently colored Virginian Tiger Moth caterpillars. On the right is a Hickory Tussock Moth caterpillar

I am including no photos of the adult moths here, but I do have some photos of adult butterflies that can be paired with pictures of their caterpillars.

Most Monarchs had already migrated when this caterpillar (below) was still feeding on milkweed leaves recently. I do not know if it will be able to complete metamorphosis in time to fly south. The picture of the adult was taken earlier in the year. 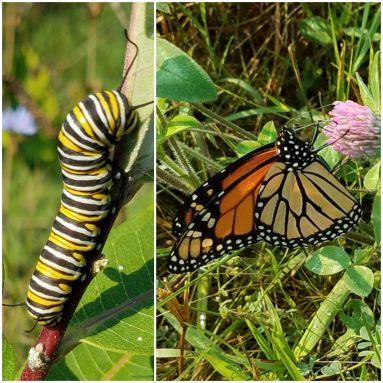 Black Swallowtails are also common in Eliza Howell, though they are not as well-known as Monarchs. They lay their eggs on plants of the carrot family and I found this one in August on Queen Anne’s Lace (“wild carrot”).

Black Swallowtails are sexually dimorphic (differences in appearance between the sexes). The female is on the upper right; the male on the lower right.

I don’t know how many people would show up for an advertised “Caterpillar Walk,” but if someone wanted to offer one, September would be a good time. There are more varieties present than are included here.

Caterpillars can be viewed and admired even when it is not always easy to connect them with the adult moths or butterflies they will become.