During these dog days of summer, the fields of Eliza Howell Park are alive with flowers and butterflies. Swallowtails are the largest butterflies in North America and three different swallowtail species are now flying in these fields and feeding on the flowers. They are big and hard to miss when one is walking among the flowers.

And they almost beg to have their picture taken.

Two swallowtail species are often found in the park during the summer – Black Swallowtail and Tiger Swallowtail. The third, Giant Swallowtail, is a more southern species that appears only occasionally. I didn’t see it until August 4 this year, when this picture was taken. 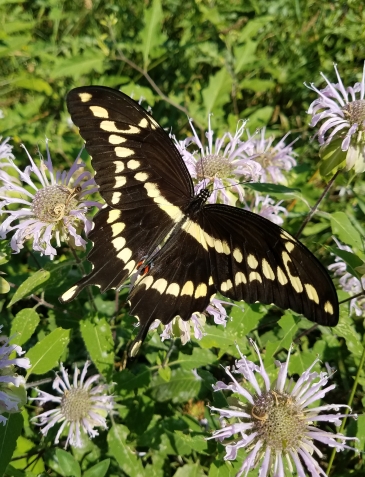 As the name suggests, Giant Swallowtail is the largest of the three (with a wingspan of about 5 inches).

Swallowtails use their long proboscis for taking nectar and the best chance for someone to get close to view and/or photograph is when they are feeding. The “swallowtail” name comes from the “tail” extending in back from each hindwing, giving the appearance of a forked tail similar to that of some swallows (such as the Barn Swallow).

In addition to the fact that the Black Swallowtail is smaller (wingspan of about 4 inches), the yellow lines are in different locations on the wings.

The Tiger Swallowtail is also yellow and black, in fact it gets its name from the black and yellow striped look. It is easily distinguished, however, as it is more a yellow butterfly than a black one. 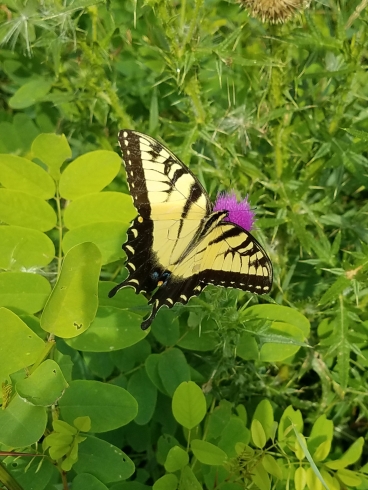 While there is some variation among individuals in size, the Eastern Tiger Swallowtail (to give its full name) is usually larger than Black Swallowtails but smaller than Giant Swallowtails.

Butterflies often look different when their wings are folded or partially folded. It is interesting to compare the next two pictures. First a Giant Swallowtail. 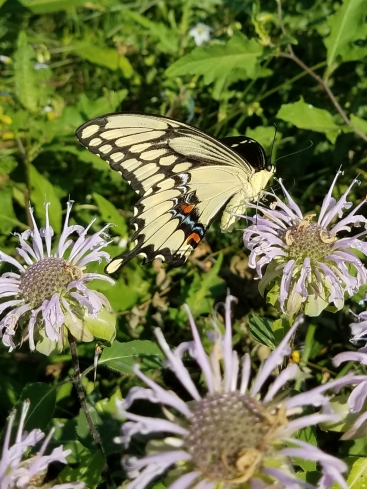 Then a Tiger Swallowtail. 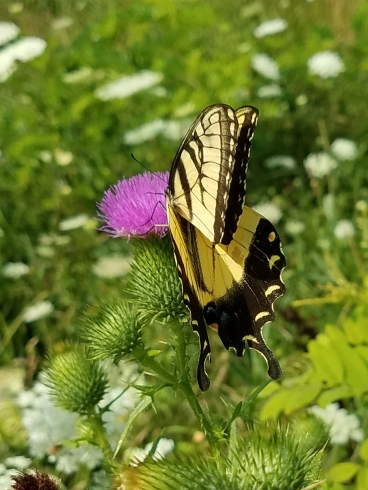 Of the three, the only one in which the difference between the male and female is major is the Black Swallowtail. Here is a picture of a female, followed by one of a male.

Butterfly watching is usually enhanced by being able to recognize differences among species. But that ability can come gradually.

My main reason for writing about these three swallowtails is simply to highlight what is happening now in Eliza Howell Park. The season is short (especially for the Giant Swallowtail), but it is a special time of the year when one can watch all three of these big, bold, and beautiful butterflies on the same day.