In the previous 14 years, I saw not a single Hermit Thrush in Eliza Howell Park in January or in March and only once, about a decade ago, in February. This year there has been one, probably the same one, present each of these three months.

True to the name “hermit,” it has been solitary, quiet, and unobtrusive, but its very presence in winter is noteworthy. 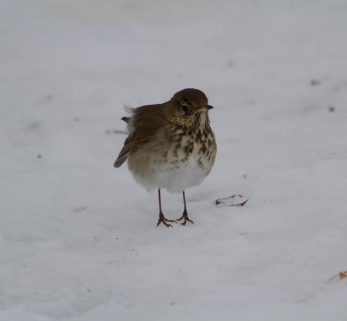 The Hermit Thrush, though considered quiet and withdrawn, has been recognized and celebrated, especially for its song. It is the state bird of Vermont. And it is the thrush in Walt Whitman’s elegy for Abraham Lincoln in 1865,  “When Lilacs Last in the Dooryard Bloom’d.” An excerpt:

It is not easy to become familiar with the Hermit Thrush’s song here in Detroit as it is not present in the breeding season. It can usually be seen only a few times as it passes through twice a year, in April/May and again in October.

We are situated about halfway between the southern end of its summer range and the northern end of its winter range, neither of which is more than a couple hundred miles away. It is not extremely rare that one shows up in southeast Michigan in winter, but it is unexpected. (The range map is from the Cornell Lab of Ornithology.)

The Hermit Thrush is a forest bird that spends most of its time on the ground or among the lower branches of trees, foraging for insects. In the winter, when insects are less plentiful, it often eats berries. In Eliza Howell this winter, I have seen it both on the ground, scratching among the fallen leaves, and in branches of shrubs and vines, seeking whatever fruit remains, such as the last of the bittersweet.

There is no need to hear its song at this time of the year; I celebrate the Hermit Thrush simply for being present this winter.