There are not many seeds or fruits still hanging on in January and February on the trees and shrubs in Eliza Howell Park. They can, however, still be found on staghorn sumac in deep winter.

When I see “her” during my winter walks in the park, I am aware that “he” does not have anything much to show at this time of the year. Staghorn sumac is one of the few plant species that develop female and male flowers on completely different plants (“dioecious”); some plants are male and some are female.

Perhaps the best known dioecious plant is cannabis, an annual. In the case of cannabis, male plants are usually discarded because pollination is unwelcome; the unpollinated flowers of the female pants are considered the best part of the plant for psychoactive effect (according to what I read).

In our Detroit neighborhood, a good example of a dioecious tree is ginkgo, which has been planted as a shade tree along certain streets. In planting ginkgos, the females are not usually as welcome as the males because the female’s abundant fruit falls on sidewalks and produces an unpleasant smell when stepped on.

About the beginning of June in Eliza Howell, the sumac flowers develop on separate shrubs, the female on the left in the photo and the male on the right.

Though they were put together here for easier comparison, I do not usually find the female and male plants in close proximity. Staghorn sumac can grow from seed, of course, but it typically spreads by underground shoots (rhizomes). As a result, a clump of sumac is usually made up of plants all of the same sex; it is not really a clump, in fact, but parts of the same plant.

The quite large clump/plant along the nature trail that I observe most frequently is female, some meters away from the nearest male that I am aware of. Sumac depends upon insects, like bees, for pollination over such distances.

The male flowers do not last long. By late June, they are beginning to fade while the females (again on the left in the photo) are just beginning to turn the red that will persevere for many months.

For the next 6 months, the flowers and seed clusters stand out.

This picture is from the middle of July.

While birds eat the seeds, they seem to do so very late in the winter, after most of the other fruit in the park is gone. This picture was taken in the middle of December. 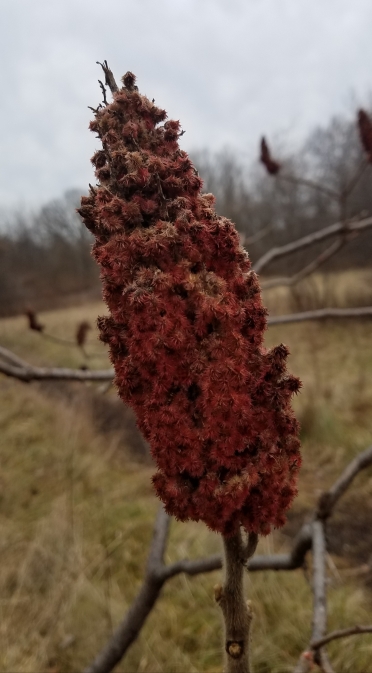 In many bird species, though not all, males are more colorful and attention-getting than females.

In the case of staghorn sumac, however, my attention is fully on the female for most of the year and only very briefly do I follow the male. She is there, standing proud, in the coldest part of winter.

6 thoughts on “The Female in Winter: Staghorn Sumac”