About a year ago, I commented on the way the seed clusters of Staghorn Sumac persist into and through the winter (December 14, 2017). Another perennial plant in Eliza Howell Park that holds its seeds well into the winter is Cattail.

Now, in mid-December, most Cattail seed clusters look like this. 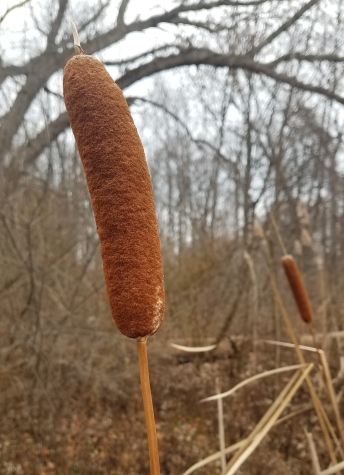 It is likely that many visitors to Eliza Howell Park never see cattails. There is only one small patch that I am aware of, at the edge of a wooded area, with only about 10 – 12 seed stalks a year.

Cattails thrive in wet soil and are usually found in or by wetlands. The Eliza Howell patch is in area that I would not call a marsh or wetland (or even a vernal pool), but does tend to be a wet spot in the spring.

Cattails spread by rhizomes (creeping roots) and by seeds. Since this patch is isolated, it probably started from seeds.

Last February, most of the seed clusters were still tightly closed, not yet dispersing seed.

In late winter, shortly before it is warm enough for the seeds to sprout, they finally open and the seeds are released, relying mostly on the wind for dispersal. The next picture is from March 22, 2018.

It would be interesting to know the source of the seeds that started the Eliza Howell patch.

The new growth on the established plants appears in April, and a couple months later seed stalks are evident. In July, they look like this.

By mid-August, the seed clusters look quite mature.

There are a number of plant species in the park that I check on regularly around the calendar year. Cattails are one, in part because of the manner and annual timing of seed dispersal. And they are a species that has observable change in winter.