Giant Swallowtail and Hummingbird Moth have at least two things in common: they have both been seen in Eliza Howell Park during the past week and they are both partial to the blossoms and nectar of Wild Bergamot.

Giant Swallowtail is the largest butterfly in North America, with a wingspan of about 5 inches.

Southern Michigan is the northern edge of its normal geographical range and some years I do not see them at all in the park. Since July 15 this year, one and sometimes two have been flittering among the large wildflowers in the field outside the road loop. They stop their flight, when they do, on a Wild Bergamot flower.

It is, I think, a combination of their size and the fact that they are not common in Detroit that always make it exciting to see one.

The Snowberry Clearwing Moth is commonly called the Hummingbird Moth (a name I like) because it looks and acts a lot like a hummingbird. It flies from flower to flower, never landing, using its proboscis to sip nectar while it hovers in the air. 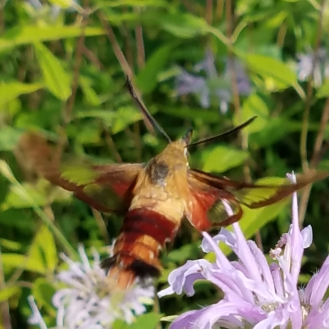 It is a daytime-active moth that shows up every year in Eliza Howell. Its wingspan is about 1 and 1/2 inches. Active among bumblebees, it somewhat resembles them, though it does not crawl over the flower as bumblebees do.

Wild Bergamot is one of the wildflowers, like Purple Coneflower, that is a magnet for butterflies, bees, and other insects. Bergamot is a type of Monarda, as is Bee Balm, a flower that many gardeners grow precisely because they want to attract butterflies and hummingbirds. 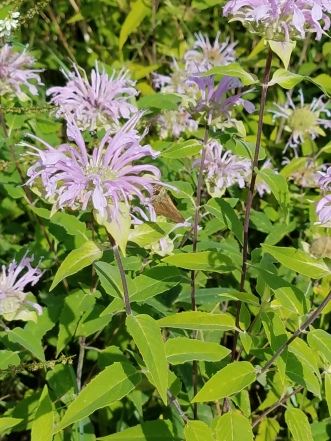 The Wild Bergamot in Eliza Howell is nearing the end of its blooming season, but it retains its power to attract.

Each of the butterflies in the next picture was photographed while visiting Bergamot. Starting top left and going clockwise: Black Swallowtail, Silver-spotted Skipper, American Lady, and E. Tiger Swallowtail. 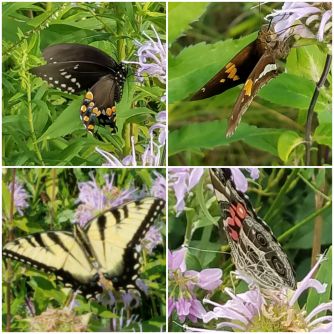 Giant Swallowtail and Hummingbird Moth have one other thing in common. They are both species that almost always elicit verbal responses and comments when seen: “look at that” or “what’s that” or “wow.”

They are currently entertaining in Eliza Howell Park, hosted by Wild Bergamot.