On November 30, 2017, I first noticed the dead deer while I was walking through the bottomland in Eliza Howell Park, not far from where the two branches of the Rouge River meet. It was in the open, on the ground near the Main branch of the river. Based both on the animal’s appearance and on the fact that I take this route frequently, I think it had only recently died.

There were no wounds noticeable and I have no way of knowing what might have been the cause of death. 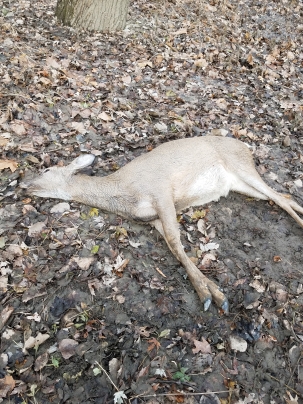 On subsequent walks, about every 2 – 3 days, I took a look at the carcass, wondering how long it might be before it was found by carrion eaters at this times of the year. Most of the Turkey Vultures had migrated a little earlier in the Fall, so it would more likely be a mammal.

The deer remained undisturbed as the weather turned colder. 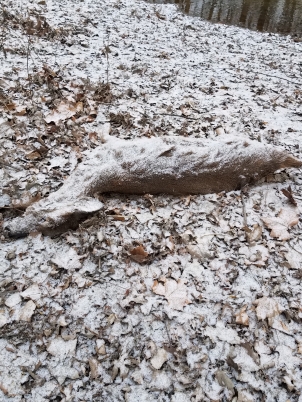 When I checked on December 12, the carcass still appeared to be untouched, though it was a little difficult to be sure, since it was covered with snow.

Three days later, I came upon a very different picture. The carcass had been dragged several feet, torn open, and much of the meat taken. 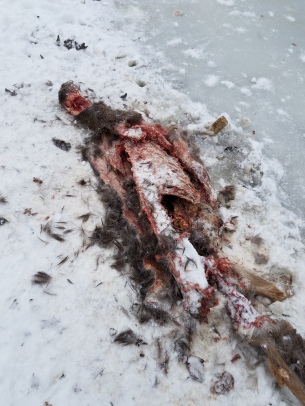 There were many mammal tracks present, but the snow was all trampled down, the tracks were on top of one another, and it was very difficult to find a distinct and clear print. It looked like some animal or animals had had been working on the carcass for an extended period of time. The clearest tracks seemed to be about the size of those made by a medium-sized dog.

So what was it? Without any clear evidence, I can only speculate on what it might well have been, based on some key considerations. The fact that the carcass was moved several feet and that the carcass appeared to have had large chunks torn out suggests fairly large mammal(s). It is possible that small mammals might have been eating at the carcass as well, but this much consumption probably means something larger. It also might mean more than one.

My best guess is coyote. They have been seen in the park for some time, including recently, though I have no knowledge of the number. They are also known to be carrion eaters. They normally eat much smaller prey and do not attempt to bring down live deer. But a dead deer is different.  And, of course, coyotes can be in packs.

It is possible that it could be a pack of dogs. I have seen a few feral dogs in the park several times in past, but not recently, so I think it is more likely that this is the work of coyotes.

In my most recent visit, I saw that the skeleton had been further stripped. 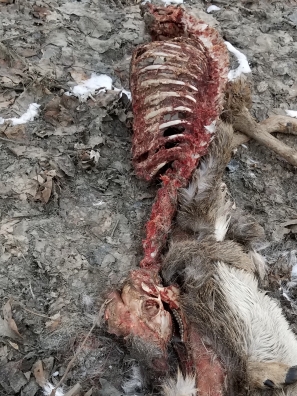 Eliza Howell Park is a Detroit city park and observing some of what happened in the three weeks since the deer died provides another glimpse of the nature of urban wildlife activity.